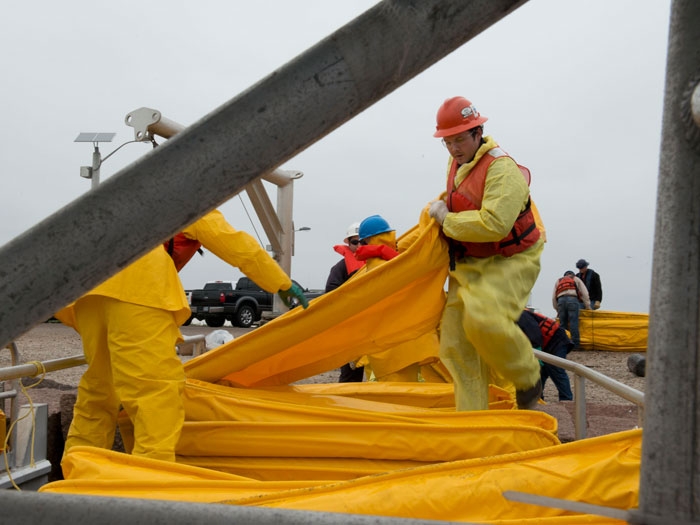 MARCH 25, 2014 —The Coast Guard has authorized limited marine traffic in the safety zone in the Port of Houston/Galveston for commercial ship traffic, Tuesday.

The Channel had been closed since Saturday’s collision between a bulker and a barge resulted in the spill of, according to media reports, some 168,000 gallons of heavy fuel from the barge.

Clean up operations are still ongoing, however ships are being prioritized for transit by the Port Coordination Team. Barges are being allowed to transit through the Houston Ship Channel and on the Intracoastal Waterway, after assessment teams deemed the channel clear.

“The cleanup operations progress is to the point that there is minimal danger of contamination to the commercial maritime traffic and allowing limited transit during daylight hours,” said Capt. Brian Penoyer, Captain of the Port for Houston/Galveston. “This is an important accomplishment for every person working this response.”

“As a member of the Central Texas Coastal Area Committee, we’re pleased to see the plans outlined and implemented from our Area Contingency Plan proven effective in protecting and minimizing the impact on our sensitive and complex system,” said Rich Arnhart, Regional Director of the Texas General Land Office Oil Spill Prevention & Response Region 2.

“This afternoon’s reopening of the ship channel is an important milestone and a testament to the coordination, hard work and rapid response of the Incident Command and the men and women working on the water under often difficult conditions,” said Jim Guidry, the Executive Vice President for Vessel Operations with Kirby Inland Marine, LP. “But our work together is not done. Kirby Inland Marine remains committed to completing this important work and to limiting any impact on the environment and local economy.”

The Galveston Bolivar ferry is now running and will be operating between 7 a.m. to 7 p.m.

Experts from U.S. Fish and Wildlife and Texas Parks and Wildlife Department are responding with rehabilitation, husbandry and stabilization trailers staged along the Texas City Dike, Bolivar Peninsula and the Phoenix Pollution Control Facility.

There have been 18 birds confirmed captured and 10 deceased. The public is reminded to refrain from capturing any potentially affected wildlife.

There is approximately 15.5 miles of nonconsecutive impacted shoreline.

To date, the National Oceanic and Atmospheric Administration reports evaporation of 16,800 gallons and a natural dispersion rate of 1,680 gallons of spilled fuel oil.