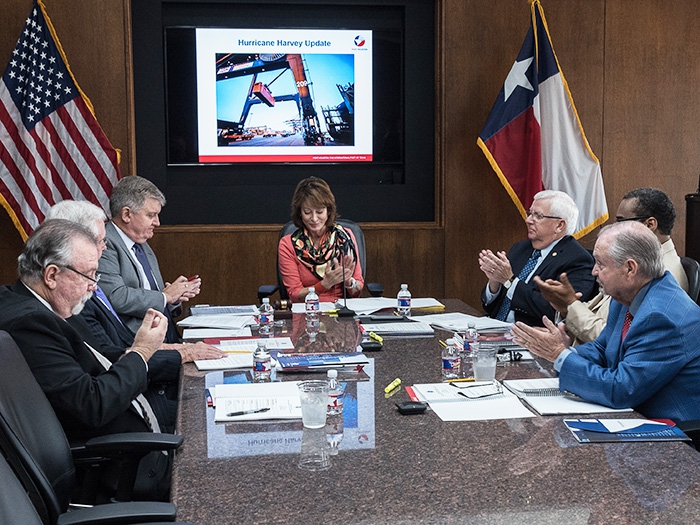 SEPTEMBER 26, 2017 — The Houston Ship Channel has been hit hard by Hurricane Harvey.

“The floodwater coming through our system deposited tons and tons of silt into the Houston Ship Channel and throughout Galveston Bay,” Houston Port Commission Chairman Janiece Longoria said at today’s regular monthly meeting of the commission. “While the Channel is open and commerce is flowing with some restrictions, the Houston Ship Channel needs significant dredging to address these storm damages.”

“We are in desperate need of additional relief to properly dredge the channel so that it can accommodate normal commerce at its authorized depth and width,” she said,

Chairman Longoria presented satellite images of the mouth of the Houston Ship Channel taken days before and after the devastating rains inundated the Gulf Coast.

Additional images presented during the meeting showed dramatic shoaling at the entrances of the port’s three major terminals.

“There has been ten feet of sediment collected as a result of massive amounts of floodwater that has carried this silt into the channel,” Chairman Longoria said. “Again, this seriously restricts commerce to and from our facilities.” Port Houston’s two container terminals, Barbours Cut and Bayport together are responsible for nearly 70 percent of the container cargo in the U.S. Gulf.

Chairman Longoria and Executive Director Roger Guenther both stressed that maintaining the Houston Ship Channel’s depth is critical to commerce. A study conducted by the Texas Transportation Institute determined that a loss of one foot of depth in the channel costs the U.S. economy as much as $281 million dollars per year.

“We must also look at improvements to this waterway that make it more resilient and reduce the impacts of future weather events,” said Chairman Longoria. “We believe that rather than just returning the channel to its pre-storm depth and width, we must enhance its efficiency and we must build in resiliency, to make it better for ever- growing demand.”

She added part of the channel’s recovery is to “harden this asset to make it better for the future,” which may include a channel that is deepened and widened.

Actions taken by the Port Commission included authorizing an additional payment not to exceed $2 million to the U.S. Army Corps of Engineers as a proactive measure for Hurricane Harvey-related dredging expenses for its general cargo terminals.

Additionally, the Commission agreed to renew an agreement with the U.S. Coast Guard to exchange and share information and data in order to enhance maritime safety and security. It also awarded contracts to fortify communication capabilities for telephones, data center and inter-terminal connectivity.