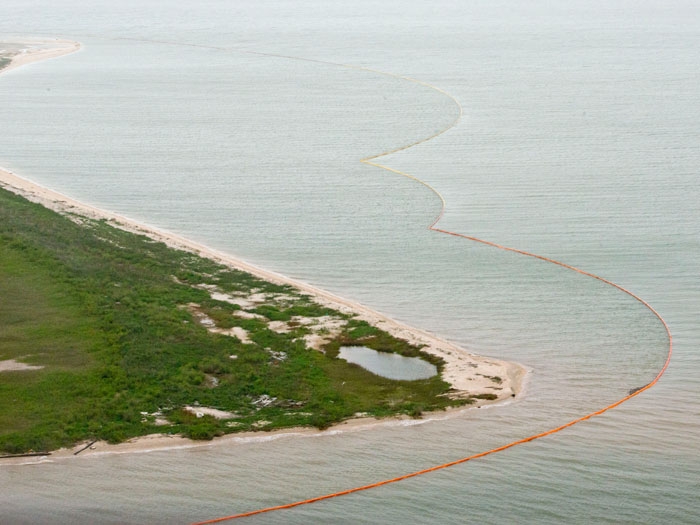 Miles of boom being placed in areas affected by the oil spill on March 27, 2014. Clean-up efforts continue for the Texas City "Y" response, which resulted from a collision between a bulk carrier and a barge Saturday in the Houston Ship Channel

MARCH 28, 2014 — In a release on the ongoing response to the spill that closed the Houston Ship Channel earlier this week, the Unified Command reports that the Captain of the Port of Houston/Galveston opened the bay to all traffic yesterday after multiple cleanup assessments and input from the Texas Department of State Health Services.

A current Broadcast Notice to Mariners instructs all boaters that the safety zone remains in effect, however all restrictions are lifted except to transit using safe distance and minimum safe speeds in the vicinity of any oil spill response or salvage operations and to avoid all areas of sheening or visible oil. If any oil is sighted, boaters should report it to the National Response Center at 1-800-424-8802.

While all recreational activities, including swimming are open, the DSHS does advise people not to swim in areas where they can see oil.

The DSHS stated that there is no indication that seafood in the marketplace has been impacted by the oil spill.

After storms Wednesday afternoon and evening slowed cleanup efforts somewhat in the Ports of Texas City and Galveston because of safety concerns, responders quickly ramped up their operations during the first hours of daylight to resume cleaning contaminated areas, Thursday.

The rough weather is expected to continue to subside throughout the rest of the week, and into the weekend, allowing responders to continue cleanup efforts. Mariners are also advised as they are transiting through the port to keep a watchful eye out for protective boom and other response equipment floating in their path. If found, please report the hazard to navigation to the Coast Guard on VHF Ch. 16.

Weather conditions closed five of the six decontamination stations established for boats in the area, Wednesday evening, but all reopened as the weather calmed today. Forty vessels in total have been cleaned since Saturday’s spill, with 62 more in queue as of yesterday.

A second Incident Command Post was established in Port O’Connor, Texas, Wednesday, and is directly responding to any possible local area impact. For more information, contact the Matagorda Bay Joint Information Center at (214) 225-8007.

The Coast Guard investigation into the incident is ongoing.