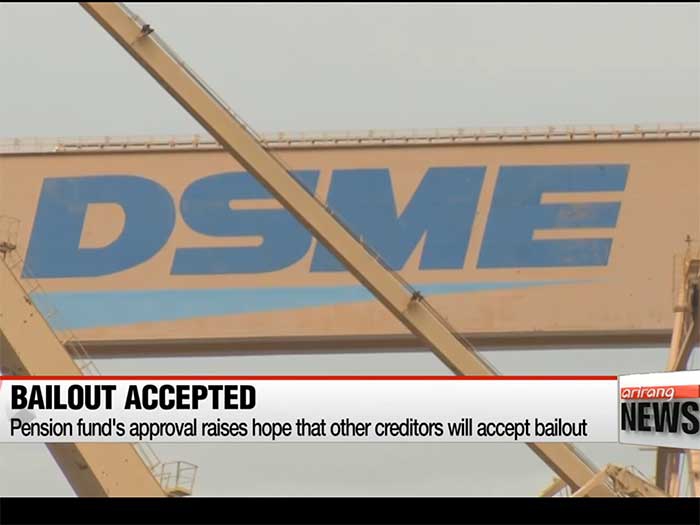 The National Pension Service (NPS), which owns some 30 percent of the shipbuilder’s corporate bonds, has now accepted the plan to keep the troubled shipbuilder afloat.

This came after both the KDB and Eximbank sent letters over the weekend pledging the repayment of corporate bonds once conditions improved.

Broadcaster Arirang News warns that “The acceptance of the NPS, which holds 30 percent of the company’s bonds, does NOT mean the debt-ridden shipbuilder has the final approval for its rescue plan.

“Enough remaining creditors will still need to vote for the debt-to equity-swap deal in a series of meetings over two days that started Monday.
“
There bondholders will consider whether to agree to a 50 percent debt-to equity swap of roughly one-and-a-half trillion won, or 1.3 billion U.S. dollars, and a three-year grace period on the remaining debt under the condition that state banks will provide Daewoo with an additional 2.6 billion dollars.

“Pundits say, though, that the pension service’s decision has paved the way for other creditors to keep one of the world’s largest shipbuilders running. “

Yonhap reports that, even after the debt rescheduling plan is approved by bondholders, DSME will have an estimated shortfall of some 1.5 trillion won this month and next month. Given this, the KDB-led creditors are expected to inject the needed cash into the shipyard from May with a proposed debt for-equity swap to be completed in June.

Under the rescue plan, says Yonhap, half of the shipyard’s corporate bonds and commercial papers will be converted into equity with the rest being rolled over to give Daewoo some leeway. KDB and Eximbank will in exchange inject 2.9 trillion won into the company to allow it to stay in business.