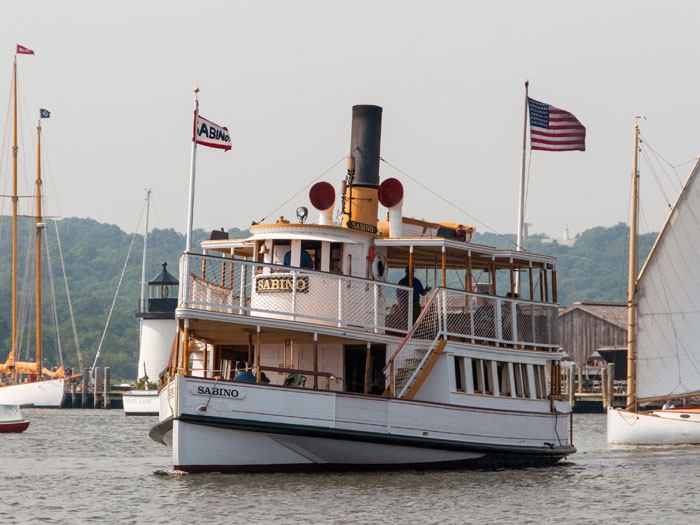 The 108-year-old Sabino is the only coal-fired, wooden steamboat still in operation in the U.S.

AUGUST 17, 2017—The last wooden hull, coal-fired steamboat in operation in the U.S. is back chugging along at the national maritime museum Mystic Seaport, Mystic, CT, after more than two years of restoration in the museum’s Henry B. duPont Preservation Shipyard.

The museum reports that on July 21 sea trials, the historic 1908-built Sabino operated for the first time under her own power with a new boiler that was custom designed and fabricated. The coal-fired boiler powers a 75-horsepower, two-cylinder compound steam engine. The engine is the original power plant that was installed in 1908 and was manufactured by the J. H. Paine & Son Co. in nearby Noank, CT.

The 57 ft Sabino was built in 1908 in East Boothbay, ME, and spent most of her career ferrying passengers and cargo between Maine towns and islands. Sabino came to Mystic Seaport in 1973 and was designated a National Historic Landmark in 1992.

Back in 2015, Mystic Seaport was awarded a $199,806 grant by the National Park Service, in partnership with the Maritime Administration (MARAD), to support the restoration of the Sabino.

Restoration work on the Sabino began in December 2014 and included reframing much of the stern, replacing the keel bolts, installing new planking and decking, and restoring portions of the superstructure. In addition, numerous mechanical and systems upgrades were carried out, most notably the fabrication and installation of a new boiler to meet modern safety and regulatory requirements. The museum expects the restoration will keep Sabino in operation for at least the next 25 to 30 years.

Starting on August 2, the Sabino began operating six days a week, three cruise per day from the Mystic Seaport waterfront. The boat does not operate on Tuesdays. Sabino can carry 74 passengers and is available for group charters. Her operating season ends October 9.