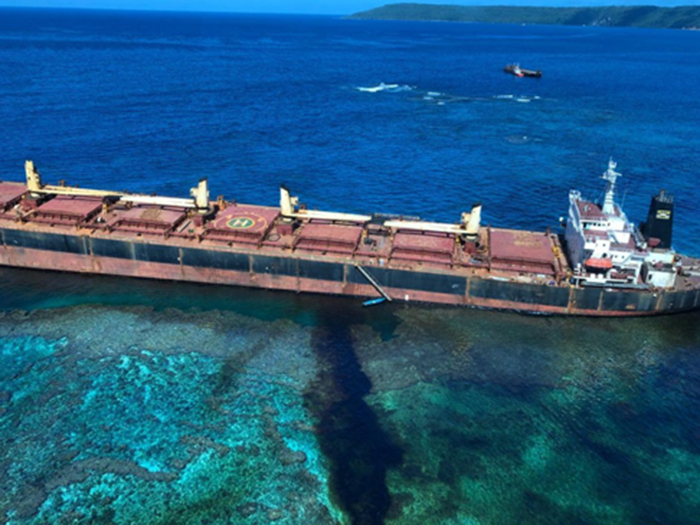 Pollution from the Solomon Trader, a 1994 built bulk carrier that ran aground in the Solomon Islands on February 5 is now threatening Kangava Bay, Rennell island, home to a UNESCO World Heritage site.

Reportedly, the ship was loading bauxite when Cyclone Oma drove it onto a reef. It was carrying over 700 tonnes of heavy fuel oil when it grounded.

When news of the grounding emerged on February 10, the Solomon Islands government sought Australia’s assistance to assess the impact of the incident and advise on options to respond.

Yesterday, the Australian High Commission (embassy) in the Solomon Islands reported that up to 75 tons of HFO has already dispersed across the island’s sea and shoreline, contaminating the ecologically delicate area. There is a high risk remaining heavy fuel oil on the vessel (currently estimated at over 600 tonnes) will be released into the surrounding area.

Australia has deployed Australian Maritime Safety Authority (AMSA) personnel and assets to conduct aerial surveillance, undertake an operational assessment of the site and provide advice to the Solomon Islands government on potential mitigation options. Australia has also pre-positioned equipment and deployed a salvage consultant to advise the Solomon Islands government on the operations of the commercial entities involved.

The Solomon Islands government has advised that responsibility for salvaging the vessel and mitigating the environmental impact of this incident rests with the commercial entities involved.

The High Commission says that “Australia has been profoundly disappointed by the slow response of these companies, and their lack of adequate communications with and responsiveness to the Solomon Islands government.”

According to the Equasis data base, the Hong Kong registered 73,592 dwt Solomon Trader is owned and managed by King Trader Ltd of Hong Kong.

“Australia will continue to stand behind the Solomon Islands government’s efforts to ensure the commercial parties responsible for this incident take action,” says the High Commission. “We expect companies operating in our region to meet international standards and take seriously their environmental obligations.”