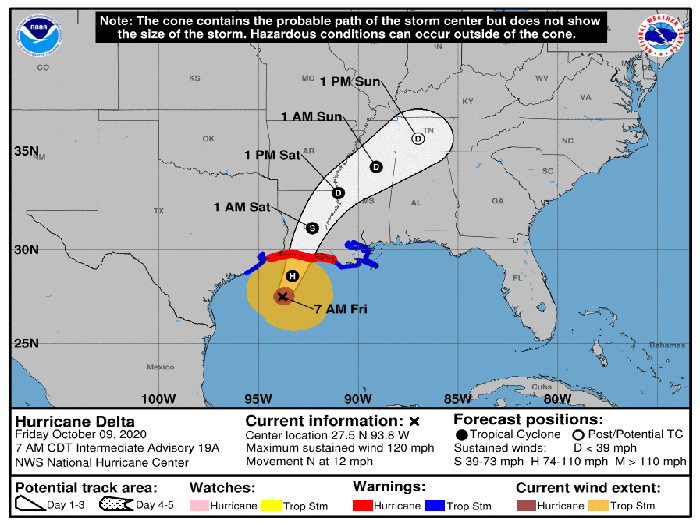 The U.S. Gulf Coast, and Louisiana in particular, was this morning getting ready for the arrival of Hurricane Delta, which threatens to tear through areas still recovering from Hurricane Laura which hit the Lake Charles region in August.

In a bulletin issued this morning at 7.00 a.m. CDT the National Hurricane Center said that rainbands of Delta were spreading into southwestern Louisiana and southeastern Texas with the storm expected to bring hurricane conditions and a life-threatening storm surge to portions of the northern Gulf Coast later today.

In a subsequent tweet, the National Hurricane Center said preparations for the arrival of the storm eed to be rushed to completion, with tropical-storm-force winds expected to reach the coast in the next couple of hours, making preparations dangerous or impossible to complete.

Coast Guard assets across the region have been repositioned and pre-staged in order to preserve readiness and to provide support for areas expected to be impacted by the impending hurricane.

“We are prepared, we’re ready, we understand what we need to do and how we need to do it,” said Capt. Will Watson, commander of Coast Guard Sector New Orleans, “planning and pre-staging resources from other areas is just one example of how we are preparing for Hurricane Delta.”

For Hurricane Delta the Coast Guard has pre-staged a total of eight helicopters, four fixed-wing aircraft and seven Shallow Water Response Teams with more than 20 boats.

Additional assets will deploy for pre-staging operations as the day progresses.