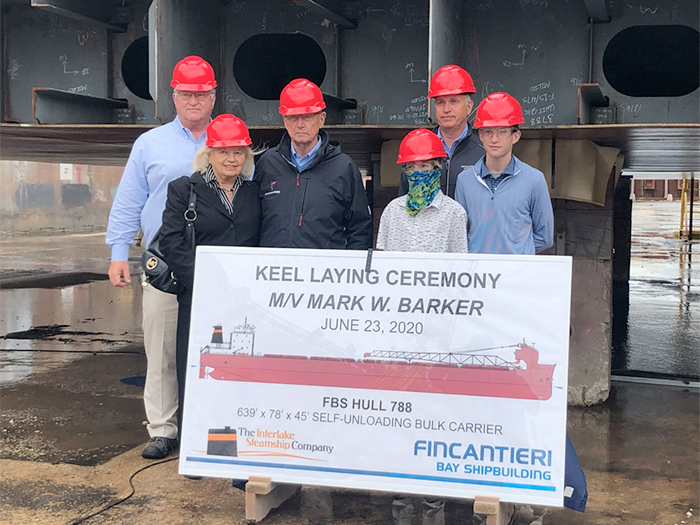 During the ceremony, Interlake’s Chairman, James R. Barker, revealed that the new vessel would bear the name of his son and second-generation leader of the company, Mark W. Barker.

The Interlake Steamship Company and Fincantieri Bay Shipbuilding, Sturgeon Bay, Wis., yesterday hosted a ceremonial keel laying to mark the start of assembly on the first U.S.-flagged Great Lakes bulk carrier to be built in more than 35 years.

The event came after more than nine months of engineering and prefabrication of the bulker’s modular sections.

With modern ships now largely built in a series of pre-fabricated, complete hull sections rather than being built around a single keel, the event recognized the keel laying as the first joining of modular components, or the lowering of the first modules into place in the graving dock.

During the ceremony, Interlake’s Chairman James R. Barker revealed that the new vessel would bear the name of his son and second-generation leader of the company, Mark Barker.

“This ship is more than the steel assembled here by Fincantieri Bay Shipbuilding,” said Barker, who has led the family-run company for more than three decades. “This ship represents Interlake’s determination to be an active and responsible participant in all aspects of Great Lakes trade.”

“This ship is being named for my son, Mark W. Barker, to recognize the many contributions that he has made to the company, the industry, and to our community. In addition, this naming reflects the successful management team that he has put together,” Barker added. “Finally, it reflects that we are a family company and our commitment to staying one.”

The naming and keel laying also signifies that Interlake and Fincantieri Bay Shipbuilding are well underway on the historic project.

“Our workforce is very proud to construct what will become a ‘homeport’ ship,” saidFincantieri Bay Shipbuilding’s Vice President and General Manager Todd Thayse. “This large-scale bulk carrier is being built on the Great Lakes and will operate right here on the Great Lakes, which creates a sense of local and regional pride. Today’s ceremony with Interlake and the naming of the vessel really brings this ship to life. We are excited and appreciative for Interlake’s continued confidence in the quality of our work.”

During the keel laying ceremony, there is a coin-setting tradition of having the youngest apprentice place newly-minted silver and gold coins under the keel upon which the ship will be constructed. Luke and Eli Barker, sons of Mark W. Barker and third-generation members of the family company, were chosen as the symbolic “young apprentices.” The brothers collected coins from various Interlake officials and tucked them in a bag, which they nailed into an oak block upon which the keel was set. When the ship is finished, the owners and others are presented with the block and coins, with both pieces becoming a part of the ships’ artifacts.

“It is truly amazing to have a ship that is built here in Wisconsin and made from steel from Indiana that came from iron ore mined in Minnesota with U.S. crews, U.S. workers, and U.S. miners all doing this for our great Country,” said Mark W. Barker, President of Interlake. “This is just an amazing story that I am absolutely privileged and so proud to be a part of as we continue the long tradition in this country of building, running and operating the U.S. fleet.”

Scheduled for completion in mid-2022, the new River-Class, self-unloading bulk carrier is believed to be the first ship for U.S. Great Lakes service built on the Great Lakes since 1983. Measuring 639 feet in length, the 28,000 dwt ship will transport raw materials such as salt, iron ore, and stone to support manufacturing throughout the Great Lakes region.