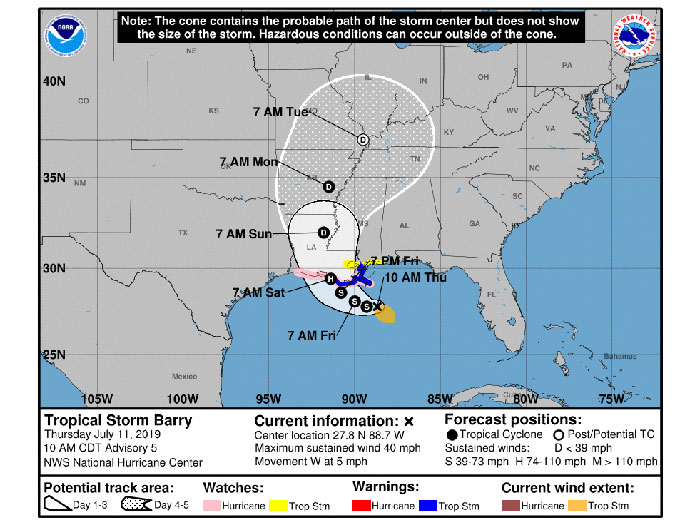 With the National Hurricane Center yeserday forecasting that a tropical depression would form in the Gulf Coast region by  July 11, the U.S. Coast Guard began adjusting port conditions and pre-staging response assets in the region.

Meantime, offshore oil and gas operators in the Gulf of Mexico have evacuated platforms and rigs in response to tropical weather activity. The Bureau of Safety and Environmental Enforcement (BSEE) Hurricane Response Team is activated and monitoring the operators’ activities. The team will continue to work with offshore operators and other state and federal agencies until operations return to normal and the storm is no longer a threat to Gulf of Mexico oil and gas activities.

Based on data from offshore operator reports submitted as of 11:30 CDT today, personnel have been evacuated from a total of 15 production platforms, 2.24 percent of the 669 manned platforms in the Gulf of Mexico. Production platforms are the structures located offshore from which oil and natural gas are produced. Unlike drilling rigs, which typically move from location to location, production facilities remain in the same location throughout a project’s duration.

Personnel have been evacuated from four rigs (non-dynamically positioned “DP” rigs), equivalent to 19.05 percent of the 21 rigs of this type currently operating in the Gulf. Rigs can include several types of offshore drilling facilities including jackup rigs, platform rigs, all submersibles and moored semisubmersibles.

Three DP rigs have moved off location out of the storm’s path as a precaution. This number represents 15 percent of the 20 DP rigs currently operating in the Gulf. DP rigs maintain their location while conducting well operations by using thrusters and propellers, the rigs are not moored to the seafloor; therefore, they can move off location in a relatively short time-frame. Personnel remain on-board and return to the location once the storm has passed.

As part of the evacuation process, personnel activate applicable shut-in procedures, which can frequently be accomplished from a remote location. This involves closing the sub-surface safety valves located below the surface of the ocean floor to prevent the release of oil or gas. Shutting-in oil and gas production is a standard procedure conducted by industry for safety and environmental reasons.

From operator reports, BSEE estimates that approximately 31.89 percent of the current oil production in the Gulf of Mexico has been shut-in, which equates to 602,715 barrels of oil per day. It is also estimated that approximately 17.85 percent of the natural gas production, or 496.2 million cubic feet per day in the Gulf of Mexico has been shut-in. The production percentages are calculated using information submitted by offshore operators in daily reports. Shut-in production information included in these reports is based on the amount of oil and gas the operator expected to produce that day. The shut-in production figures therefore are estimates, which BSEE compares to historical production reports to ensure the estimates follow a logical pattern.

After the storm has passed, facilities will be inspected. Once all standard checks have been completed, production from undamaged facilities will be brought back on line immediately. Facilities sustaining damage may take longer to bring back on line. BSEE will continue to update the evacuation and shut-in statistics at 1:00 p.m. CDT each day as appropriate.