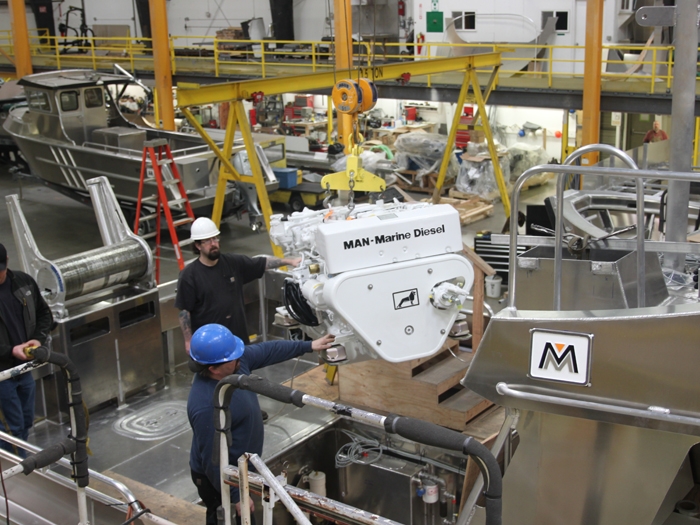 MAN adapted the internal elements of its entire engine range without increasing consumption at full load in advance of the introduction of EPA Tier 3, which requires an additional 20% reduction in nitrous oxides (NOx) and a further 40% reduction in particle emissions compared to EPA Tier 2

Operating in the Bristol Bay are of Alaska,  the Ava Jane is equipped with a MAN in-line six cylinder engine delivering 537 kW (730 hp) a 2,300 rpm.

MAN’s International Engine Competence Center in Nuremberg,Germany, has adapted all 16 performance levels of its in-line six cylinder engines and the newest generation of V8 and V12 engines to Tier 3 levels by internal optimizations that required neither exhaust recirculation nor an exhaust after treatment system. As there was no need to add on any additional emission reducing components, the MAN engines’ compact size was not affected.

“Our claim of achieving the highest levels of efficiency is also fulfilled with our EPA Tier 3 engines. This is why with our MAN D2862, for example, we have set new benchmarks for consumption in the field of heavy duty applications – and thus also in terms of total costs of ownership,” says Reiner Roessner, Head of Sales MAN Engines.

George Dauber, an active fisherman for over 35 years involved in the Ava Jane project together with the Mavrik Marine Shipyard, has high praise for the MAN R6-730. “For me, there is no engine to match it – none that is so quiet on deck and at the pilot’s station,” he says.

MAN offers a broad range of high-speed four-stroke diesel engines for use in commercial marine applications.

For heavy duty applications – with unlimited operating hours and a full-load operation share of up to 100% – including for tugs and other workboats, MAN offers an output range from 190 to 735 kW (258 to 1,000 hp).

MAN marine engines are delivered ready for installation and are optimally designed for the given application and usage conditions. As regards after installation, MAN offers inspection and acceptance services and even full commissioning of the engine. All engines comply with internationally applicable exhaust regulations.