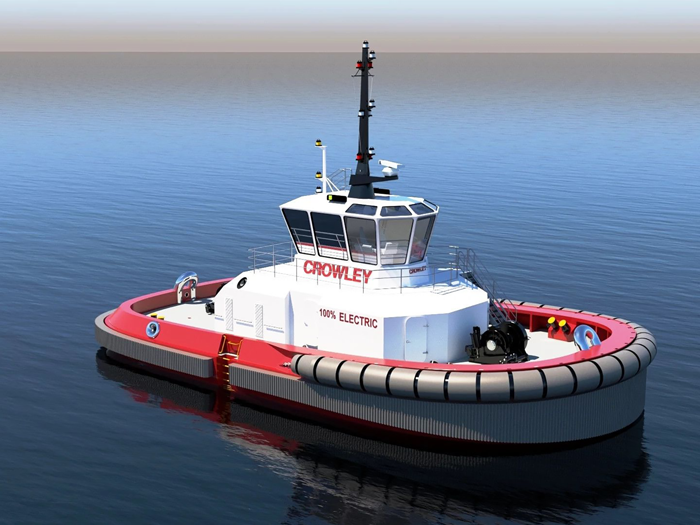 GM is to phase out gasoline and diesel powered cars by 2035—and California could ban gas-fueled leaf blowers and lawnmowers by 2024. Developments like that are a reminder that moves to make maritime transportation a zero-emissions industry are hardly happening in isolation.

On a small scale, some zero-emissions vessels are already in operation—the two all-electric Maid of the Mist boats giving tourists a close up of in Niagara Falls being an example. Many other vessels are considered zero emissions during part of their operations, including platform supply vessels fitted with battery packs or containerships plugged into shoreside power while in port. But how do we get from these beginnings to an emissions-free world fleet? And when will we get there?

The upcoming meeting of IMO’s Maritime Environmental Protection Committee (MEPC 75) is likely to prove interesting, with the U.S. now joining countries like Denmark in pushing for a complete elimination of GHG emissions from shipping by 2050, and the International Chamber of Shipping looking for market-based measures (a mealy mouthed way of saying some sort of tax on fuel and/or emissions) to finance the massive R&D that will be needed to meet IMO’s goals.

Maritime is clearly on a journey to a greener future and the speed is picking up. And, as this month’s Inside Washington column makes clear, it’s not only deep-sea ships that are affected.

From a power and propulsion point of view, whether you’re talking VLCCs or inland towboats, the fundamental goals remain the same: you want to push the maximum payload possible through the water for a given horsepower, which means having an optimized hull form and propulsion plant.

With those thoughts in mind, let’s look at some recent developments that show how far along the journey to zero we are right now.

Car carrier giant Höegh Autoliners, headquartered in Oslo, Norway, last month announced plans to build a series of ammonia-ready car carriers called the Aurora Class that will not only be the most environmentally friendly ever built, but the largest, with a capacity for 9,100 car equivalent units.

The company has entered a Memorandum of Understanding with China’s Xiamen Shipbuilding Industry that, it says, will make it possible to have the first vessel delivered by the end of 2023.

“We are accelerating our decarbonization efforts to meet our net zero emissions target by 2040,” says Höegh Autoliners CEO Andreas Enger. “Together with our customers and trusted partners we will make a significant contribution to a more sustainable maritime industry.”

Appropriately, the Aurora Class is designed to transport the cars of the future. Its strengthened decks and enhanced internal ramp systems, enable electric vehicles to be carried on all decks and provide more flexibility for heavier project cargo.

A MAN Energy Solutions multi-fuel engine that can run on various biofuel and conventional fuels, including LNG, will power the Aurora Class. With minor modifications, it can transition to use future zero-carbon fuels, including Green Ammonia.

“Reducing emissions is more important than eve,” says Kjeld Aabo, director new technologies at MAN Energy Solutions. “With the selected MAN B&W engine, Höegh Autoliners will be able to operate on various fuel types. After modifications of the engine, tank and auxiliary systems, the engine will be ready to run on virtually any future zero carbon emission fuels: including ammonia. We at MAN Energy Solutions are proud to be the partner on Höegh Autoliners’ path to zero.”

Meantime, one of the world’s leading tanker operators, Euronav NV, also has its eyes on ammonia. It has just entered into an agreement with the Hyundai Samho shipyard in South Korea for two VLCC newbuilds plus an option for a third vessel. These ships will be LNG-ready and Euronav says it is working in cooperation with the shipyard and classification society to include an ammonia-ready notation with the potential to reduce CO2 emissions to zero “when technology, logistics and the regulatory framework allows for it.” This, says Euronav, should be defined by the end of the summer.

The vessels will be delivered during fourth quarter 2022 and first quarter 2023, at a price of $186 million for the pair that includes $4.2 million in additions and upgrades to the standard specifications. Euronav also has the option to contract a third VLCC with the same specifications that would be delivered in the second quarter of 2023.

Ammonia Soon, But For Now LNG

Both the Höegh and Euronav orders underscore that while ammonia-fueling is a possibility that is getting nearer, it is not here yet. And while the technology may be close, production and distribution of green ammonia may well arrive a lot later. Meantime, the consensus seems to be that LNG remains the cleanest fuel currently available for large ships.

How Electric is the Future?

Two 67-meter (219.8-feet) RO/RO freight ferries on order for Norwegian grocery distributor ASKO at Cochin Shipyard in India have gotten a lot of attention because eventually it is planned that they will operate autonomously. They also illustrate, however, what is currently possible with fully electric battery propulsion, at least on fairly short routes.

Designed for transporting trailers across Oslo Fjord between two of ASKO’s distribution centers, each will have the ability to transport 16 fully loaded standard EU trailers at a time. The operating speed will be 10 knots and it is anticipated that this mode of trailer transport will replace over 2 million road miles per year of truck traffic, in turn saving around 5,000 tonnes of CO2 every year.

The main propulsion system of each vessel consists of one medium-sized Schottel EcoPeller type SRE 210 (500 kW) driven by an electric motor. This motor will be electrically powered by a battery bank of 1,846 kilowatt-hours capacity.

An electrically powered Schottel PumpJet type SPJ 57 (200 kW) will be fitted at the bow of each vessel to act both as thruster and take-home system. The extremely compact SPJ will improve maneuverability many times over.

With ports looking to reduce their carbon footprints across their operations, harbor tugs are an obvious target for electric operation.

The design also supports fully customizable features and can be adjusted for alternate power capacities suitable for a standard hybrid framework if desired. The fully modular batteries allow for upgrades as technology changes. In addition, Crowley has developed an onshore charging station to fully support charging and reliable performance at the home port.

“Crowley’s design provides operators the tugboat solution to continue serving ships quickly and powerfully, while reducing their environmental impact by eliminating a carbon footprint,” said Ray Martus, vice president, Crowley Engineering Services. “This new design sets the standard for innovation by showing that sustainability and power can work together seamlessly in our maritime industries.”

With no exhaust stack, the tug has 360 degrees of visibility from the pilot’s station, allowing the operator to see without obstruction.

The tug has also been designed for future autonomous operation to increase the safety and efficiency of the operation including integrated automation and control systems. The intelligent maneuvering and control system offers more efficient vessel operations and allows masters to focus on the overall control and positioning of the vessel in increasingly busy harbors.

A new fleet of innovative diesel/battery electric pushboats for Hidrovias do Brasil S.A. is under construction in Belov Engenharia Shipyard, in Salvador, Brazil, to a design from Robert Allan Ltd. of Vancouver, B.C., Canada. The vessels will provide terminal assistance on the Amazon River system, with delivery of the first vessel in 2022.

These pushboats are expected to be the world’s first battery electric shallow draft pushboats when they begin operating in the Amazon River system.

Built to the RApide 2000-E design, the pushboats are fitted with a DC grid diesel-battery electric propulsion system, two diesel generators, two L-Drives and a large battery bank (600 kWh initial installation, with capability to scale up to 1800 kWh). The pushboat is equipped with two L-Drive units, each with an input power of 350 kW. The propulsion system is diesel-electric to improve efficiency when operating in lower power modes. The vessel is certified as an inland navigating vessel by DNV.

When plugging into shoreside power isn’t an option, how do you power an electric vessel without putting a diesel in the picture? The answer is a fuel cell, which, at its simplest, can be understood as pretty much a way of turning fuel into electricity, with hydrogen, methanol and ammonia being the fuels usually being considered.

In the Netherlands, Rotterdam-headquartered Future Proof Shipping B.V. is currently retrofitting a 361- by 37.6-foot (110- by 11.45-meter) inland container vessel to use a fuel cell to sail 100% on hydrogen power by December of this year.

Holland Shipyards is removing the vessel’s main engine and gearbox, and installing a new modular propulsion system. This will consist of electric motors, hydrogen tanks, a PEM fuel cell system (necessary for converting hydrogen into electricity) and a battery system. The compressed hydrogen tanks, the fuel cells and the battery system are separate units that can be removed for maintenance or replacement purposes.

The fuel cell system will be triple redundant with 825 kW capacity (to supply propulsion and auxiliary power) and a 504 kWh lithium-ion battery pack for peak shaving, secondary and bridging power. The system will contain a 750V DC bus bar and an e-motor for propulsion.

“We are pleased to partner with E1 and Ardmore to drive the adoption of E1’s hydrogen purification technology across the global maritime landscape,” said Bick Brooks, cofounder and CEO of Maritime Partners LLC. “We are particularly excited about the applications for this technology within the inland marine industry, as it offers the potential to materially lower carbon emissions in the near-term and provides a clear path to achieving a zero-carbon footprint. Importantly, we believe this technology is currently cost competitive with diesel internal combustion engines.”