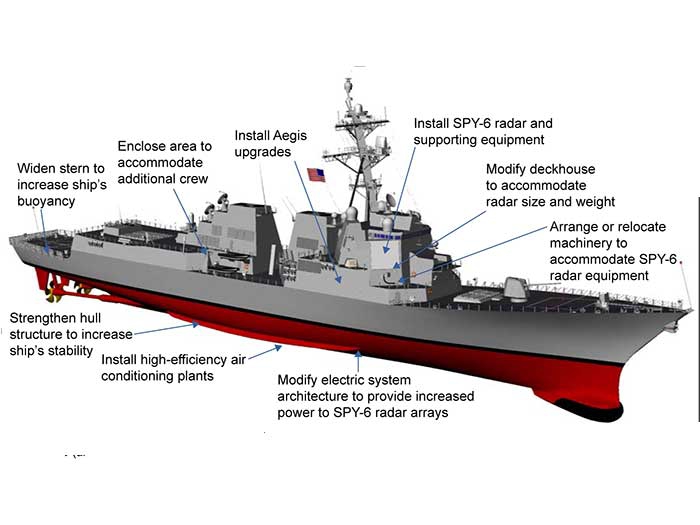 GAO says that while SPY-6 radar is progressing largely as planned, extensive development and testing remains. Testing of the integrated SPY-6 and full baseline Aegis combat system upgrade—beginning in late 2020—will be crucial for demonstrating readiness to deliver improved air and missile defense capabilities to the first DDG 51 Flight III ship in 2023.

Flight III ship design and construction will be complex—primarily due to changes needed to incorporate SPY-6 onto the ship (see figure).

GAO says that the Navy has not demonstrated sufficient acquisition and design knowledge regarding its Flight III procurement approach and opportunities exist to enhance oversight. If the Navy procures the lead Flight III ship in fiscal year (FY) 2016 as planned, limited detail design knowledge will be available to inform the procurement.

In addition, the Navy’s anticipated cost savings under the FY 2013-2017 Flight IIA multiyear procurement (MYP) plan do not reflect the planned addition of Flight III ships.

While the Navy did not update its cost savings with Flight III information, doing so would increase transparency and could help inform expected savings under the next MYP.

GAO says the Navy will be asking Congress for this authority to procure nearly half of Flight III ships before being able to meet the criteria to seek this authority. For example, detail design will not be complete and costs will not be informed by any Flight III construction history. Finally, Flight III cost and schedule performance is not distinguished from that of the overall DDG 51 ship class in annual reports to Congress. Establishing Flight III as a major subprogram would improve reporting and offer greater performance insight.

DOD partially concurred with all three recommendations but is not planning to take any new actions to address them.