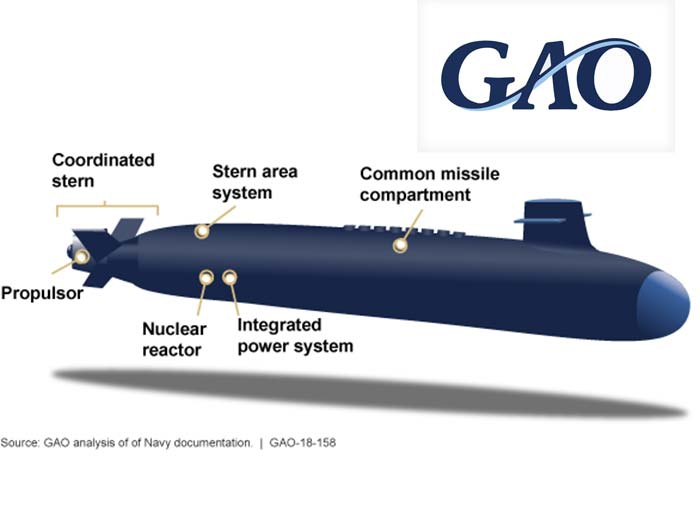 JANUARY 7, 2018 — A GAO study finds that additional development and testing are required to demonstrate the maturity of several Columbia class submarine technologies that are critical to performance, including the Integrated Power System, nuclear reactor, common missile compartment, and propulsor and related coordinated stern technologies.

The Columbia class ballistic missile submarines will replace the 14 Ohio class submarines that currently provide the sea-based leg of the U.S. nuclear triad and that are slated to begin retiring in 2027.

The first Columbia must begin patrols in 2031 to prevent a gap in deterrent capabilities; the class will ultimately carry up to 70 percent of the nation’s strategic nuclear capability. The program is a top Navy priority with an expected cost of $267 billion over its life cycle, including $128 billion to research, develop, and buy 12 submarines.

However, the GAO study says that the immaturity of key technologies means that, at this point,, it is unknown at this point whether they will work as expected, be delayed, or cost more than planned. Any unexpected delays could postpone the deployment of the lead submarine past the 2031 deadline.

The GAO says tha the Navy underrepresented the program’s technology risks in its 2015 Technology Readiness Assessment (TRA) when it did not identify these technologies as critical. Development of these technologies is key to meeting cost, schedule, and performance requirements.

Not identifying these technologies as critical means Congress may not have had the full picture of the technology risks and their potential effect on cost, schedule, and performance goals as increasing financial commitments were made.

The Navy is not required to provide Congress with an update on the program’s progress, including its technology development efforts, until fiscal year 2020—when $8.7 billion for lead ship construction will have already been authorized.

The GAO says that periodic reporting on technology development efforts in the interim could provide decision makers assurances about the remaining technical risks as the Navy asks for increasing levels of funding.

Consistent with GAO’s identified best practices, the Navy intends to complete much of the submarine’s overall design prior to starting construction to reduce the risk of cost and schedule growth. However, says GAO, the Navy recently awarded a contract for detail design while critical technologies remain unproven—a practice not in line with best practices that has led to cost growth and schedule delays on other programs.

Proceeding into detail design and construction with immature technologies can lead to design instability and cause construction delays.

The Navy plans to accelerate construction of the lead submarine to compensate for an aggressive schedule, which may lead to future delays if the technologies are not fully mature before construction starts, planned for 2021.