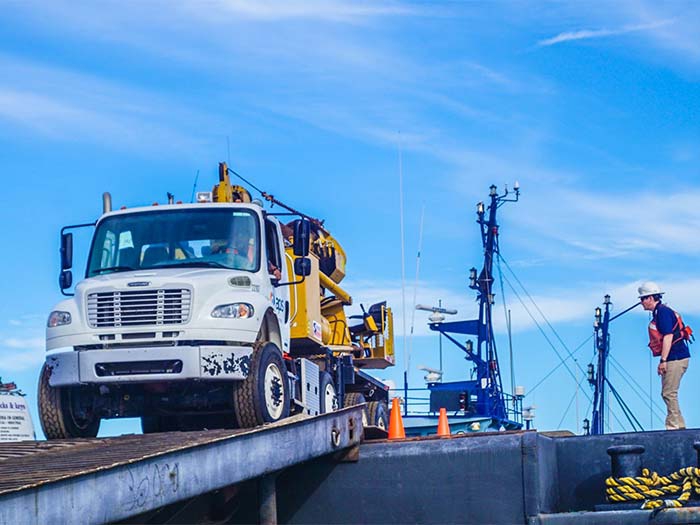 JANUARY 29, 2017 — Foss Maritime arrived this week at the Port of Ponce in Puerto Rico with seven barges loaded with 498 electric company utility trucks as part of the on-going effort to restore power to the island. Offloading of the vessels is underway.

More than 1,000 line workers and other personnel from participating electric companies have flown in to meet the trucks and start work supporting the Puerto Rico Electric Power Authority (PREPA) and the U.S. Army Corps of Engineers (USACE) to restore power.

Foss made the deliveries from the Port of Virginia in Norfolk and the Port of Lake Charles in Louisiana to Ponce, Puerto Rico safely, in under two weeks, with five barges and two ocean-going tugs.

“It’s been an amazing collaboration between Foss and the utility companies to help restore the power grid in Puerto Rico,” said Capt. Peter Roney, Project Manager for Foss, “A lot of people are still without power, so we’re glad that we have the crews and vessels at the ready to help deliver these much needed resources to the island.”

In addition to the company’s latest project shipping utility trucks, Foss has been working in conjunction with Government agencies in support of relief and rebuilding efforts in Puerto Rico and the U.S. Virgin Islands for several months.