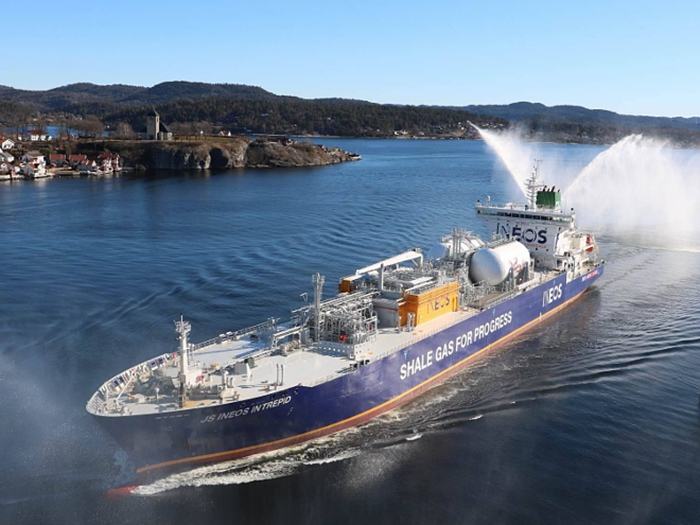 SEPTEMBER 1, 2016 — Enterprise Products Partners L.P. (NYSE:EPD) today announced that the first cargo of ethane to be exported from Enterprise’s Morgan’s Point, Texas terminal has been loaded. The M/V JS INEOS Intrepid, loaded with approximately 265,000 barrels of ethane, set sail from the facility this morning en route to the INEOS facility at Rafnes, Norway.

The Morgan’s Point ethane export facility, which is the largest of its kind in the world, has a design loading capacity of 10,000 barrels per hour.

“The energy renaissance in the state of Texas is further illustrated with the arrival of the first Ethane ship to Enterprise Products at its new facility at the Port of Houston,” said Port of Houston Commission Chairman Janiece Longoria. “As the Port Authority continues to generate jobs and economic impact for the entire region, we are excited to share this historical event with Enterprise. Our long term lease with Enterprise underscores our mission and vision to grow and diversify the business base and ‘sustain the business for the long-term.”

The driving force behind development of the terminal is the growing international demand for abundant U.S. ethane from shale plays, which offers the global petrochemical industry a low-cost feedstock option and supply diversification. By providing producers with access to the export market, the Morgan’s Point terminal is also facilitating continued development of U.S. energy reserves.

Supply for the new ethane export terminal is sourced from Enterprise’s natural gas liquids fractionation and storage complex in Mont Belvieu, Texas and transported through a new 18-mile, 24-inch diameter pipeline that was completed in February of 2016. In addition, the Mont Belvieu complex is connected to ethane production from the Marcellus and Utica Shale regions through the ATEX pipeline.

The INEOS Intrepid is one of a new INEOS Dragon class of eight 27,500 cu.m ethane carriers that, according to INEOS, are the world’s largest specifically built ethane multi-gas carriers. Built at the Quidong, China, shipyard of Sinopacific Offshore and Engineering they have an overall length of 180.30 m and beam of 26.60 m