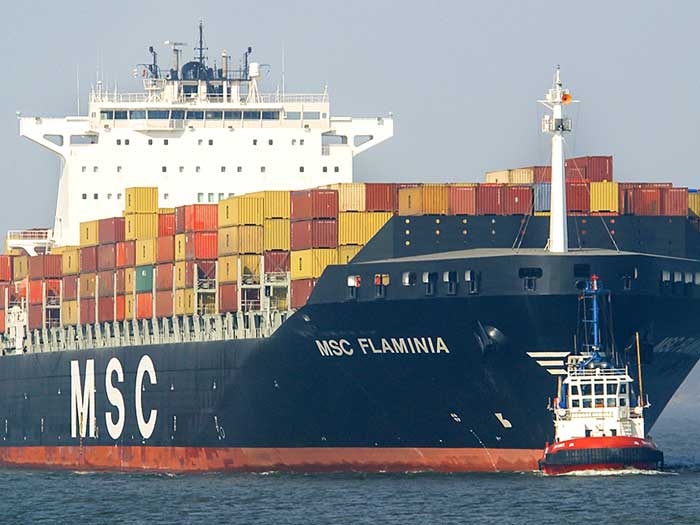 JULY 22, 2014 — Buxtehude, Germany, headquartered Reederei NSB says that the MSC Flaminia will call the Italian port of La Spezia July 23 and will be phased into scheduled service for MSC.

Just over two years ago, on July 14, 2012, the 6,750 TEU containership was severely damaged after a fire in hold 4 caused an explosion when the ship was underway from Charleston, SC, to Antwerp, Belgium. The crew was forced to abandon the ship some 1,000 nautical miles from the nearest land in the middle of the Atlantic Ocean. Two lives were lost in the incident and one crew member remains missing.

Salvage vessels were eventually able to extinguish the fire and get the vessel under tow, but the ship was not given permission to enter German waters until August 20, 2012. The incident raised questions about the reluctance of coastal states to allow entry by distressed vessels as well as about misdeclaration of containerized cargo.

The vessel has now undergone repairs at the Daewoo Mangalia shipyard in Romania that, says Reederei NSB, have transformed her into a modern eco-ship that still bears the name MSC Flaminia but has been fundamentally optimized for the challenges of the current shipping market.

The aim of the modifications to the original design was to reduce fuel consumption and to make the vessel more efficient and economic overall.

“By installing a new bulbous bow and a new propeller, fuel consumption of MSC Flaminia will be considerably lower than previously,” says Reederei NSB VP Bozidar Petrovic, who led the repair and modification team. “Analyses by our departments TOM (Technical Operating Materials) and EOD (Engine Operating Department) show that under ideal conditions 12 percent of fuel can be saved due to these two modifications alone.”

Mr. Petrovic says Reederei NSB will use MSC Flaminia to demonstrate the opportunities that eco-design offers: Namely that older ships can compete with the efficiency of modern vessels.

“Of course, we offer this package and our know-how to other shipping companies as well,” he says.

Some weeks ago an optimized bulbous bow was installed at CMA CGM Hugo, which is also managed by Reederei NSB.

Another potential for optimization as a result of low speed is gained by a Turbo Charger Cut-Out, which has been installed on many Reederei NSB ships since 2013.

In MSC Flaminia, areas which did not directly increase the fuel-efficiency have also been –modernized – among them were for example a new ballast water treatment system.

All retrofit steps took place parallel to the repairs. Apart from hundreds of smaller repairs, the middle sections of the vessel were completely exchanged, the electric installation was overhauled and major parts of the superstructure were renovated.