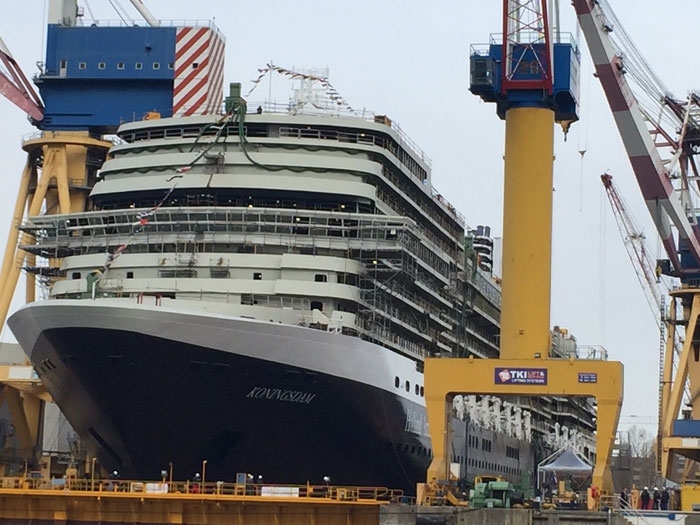 MARCH 6, 2015 — Carnival Corporation’s Holland America Line has marked another milestone in the construction of ms Koningsdam, its largest ship thus far, with the float-out and transfer of the cruise ship from its dry dock to its outfitting dock at shipbuilder Fincantieri’s Marghera shipyard in Italy.

At 99,500 gross tons and carrying 2,650 guests and 1,025 crew members, the vessel is first ship in a new Pinnacle Class.
At the outfitting dock, final construction and interior furnishing will take place until the ship is delivered March 31, 2016.

“A ship’s construction has many key milestones, and floating it out and moving it to the outfitting dock is especially symbolic,” said Orlando Ashford, president of Holland America Line. “The float out represents that we are getting closer to welcoming Koningsdam to our fleet and seeing the ship in the water adds to the excitement among our loyal guests, travel agent partners and employees in anticipation of its arrival.”

The float out followed a coin ceremony held earlier on Feb. 26, when Tineke Schroder, wife of the founder of Dutch airline Martinair and a member of Holland America Line’s Mariner Society, served as the ship’s madrina.

During the coin ceremony, observed as a tradition to bring good fortune, two gold coins were welded to the forward mast of the ship by Ms. Schroder; Antonio Quintano, director of Fincantieri Shipyard; and Keith Taylor, executive vice president, fleet operations, for Holland America Line, followed by speeches and a blessing by the shipyard chaplain. The gold coins bear the image of His Majesty King Willem-Alexander of the Netherlands. The word koning means “king” in Dutch, and the ship’s name pays honor to the first king of the Netherlands in over a century.