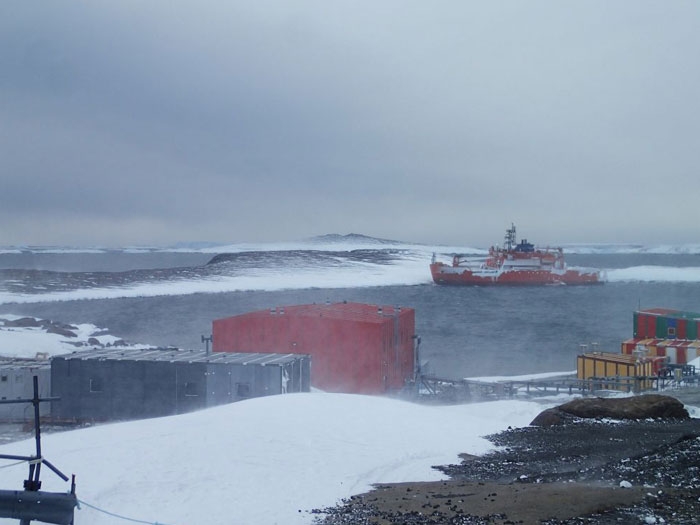 FEBRUARY 26, 2016 — The Australian Antarctic Division expedition members have been safely transferred by barge from a grounded icebreaker to the Mawson antarctic research station. The ship’s crew remain on board the vessel and will attempt to refloat it.

The incident began Wednesday, February 24, when the icebreaker Aurora Austaralis broke free of its mooring lines at Mawson at 9:15 am local time, during a blizzard and subsequently grounded on rocks at West Arm in Horseshoe Harbour.

Built by Australia’s Carrington Slipways shipyard and launched in 1989, the vessel is owned by P&O Maritime Services, but is regularly chartered by the Australian Antarctic Division (AAD) for research cruises in Antarctic waters and to support Australian bases in Antarctica.

P&O Maritime has advised that when the Aurora Australis is successfully refloated, it will be taken out of Horseshoe Harbour to a sheltered area close by for an initial assessment of any damage and to ensure no fuel leakage is occurring. The ship will remain in the vicinity of Mawson research station while a full assessment is carried out. This is expected to take a minimum of three days.

The Australian Antarctic Division says that monitoring by the ship’s crew of a breach in the hull, into a space that is usually flooded with ballast water, is continuing. It says the breach continues to pose no risk to the stability of the vessel or of fuel leaking into the environment. The crew are monitoring the ship’s fuel levels and the marine environment, with no evidence of any fuel spill to date.

The Australian Antarctic Division is consulting with other national Antarctic programs to develop options for transporting expedition members from Mawson research station back to Australia.

As we reported earlier, Australia is expected to soon finalize contractual arrangements for replace Aurora Australis with a faster, larger and stronger icebreaker, to be built by Damen Schelde Naval Shipbuilding at Damen’s Galati, Romania, shipyard with commissioning expected in October 2019.

Aurora Australis is to be replaced with a new, larger icebreaker