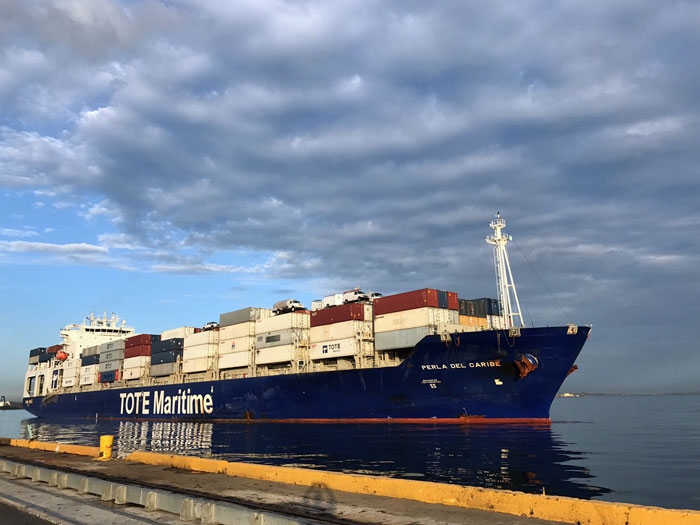 Since Hurricane Maria made landfall in Puerto Rico on September 19, Jones Act carrier TOTE Maritime has delivered over 7,200 containers of food, water, oxygen, generators and other essential relief and recovery items. This is along with the regular day to day commercial needs for the island

OCTOBER 27, 2017—The humanitarian crisis in Puerto Rico following the devastation of Hurricane Maria gave an opening to critics of the Jones Act to blame the law for hindering the relief and the recovery efforts on the island. It led to the introduction of two bills in Congress that would either exempt or provide a moratorium of the Jones Act in Puerto Rico.

Two maritime attorneys at the well-respected law firm of Blank Rome LLP, Washington, DC, see little chance of either bill making headway in Congress. In discussing the Jones Act at the NAMEPA Annual Conference & Awards Dinner yesterday onboard the Hornblower Infinity in New York, Jeanne Grasso, Partner, and Joan Bondareff, of Counsel, both of maritime law firm Blank Rome LLP, said “We suspect that the Jones Act waivers during the hurricanes may have been partly politically motivated. But once DoD requests them, they have to be issued.”

Added Grasso, “I really don’t think we are going to see any changes” in regards to the Jones Act.

A waiver to the Jones Act can only be issued in the interests of national security.

THE BILLS IN QUESTION
One of the bills introduced on Oct. 10 by Congressman Gary Palmer (R-AL) and Congresswoman Nydia Velázquez (D-NY) was H.R. 3966, the “Puerto Rico Humanitarian Relief Act,” would place a five-year moratorium of the Jones Act on any goods shipped to Puerto Rico from the U.S. mainland.

“The Congress has the responsibility to act when enacted laws prove to be burdensome,” said Congressman Palmer. “This is especially true in a humanitarian crisis. Our bill provides Puerto Ricans with extended relief from the Jones Act to help them put their lives back together as they rebuild their homes, their communities and their infrastructure.”

Echoing the comments by Congressman Palmer, Congresswoman Nydia Velázquez said that “a long term waiver of the Jones Act will stimulate economic activity” on the island. She also pointed out that the bill requires a full study of the Jones Act’s economic impact, “so we have the empirical data to end this debate once and for all.”

H.R. 3966 was referred to the House Subcommittee on Coast Guard and Maritime Transportation, chaired by Rep. Duncan Hunter (R-CA), a long-time proponent of the Jones Act.

JONES ACT DOESN’T BLOCK SUPPLIES
At a subcommittee hearing on Oct. 3, Chairman Hunter said critics of the Jones Act “promoted claims the law prohibited supplies from getting to Puerto Rico. However, as we know, that was false. Supplies have been getting to the island and have been backlogged at the ports, due to the devastation of logistics on the island.  Foreign vessels are also bringing fuel and supplies to the island from foreign ports; the Jones Act does not prohibit that from happening.”

“The Jones Act is just another example of a federal regulation that harms American consumers, gives foreign corporations an edge over American businesses, and makes disaster response harder,” said Senator Lee. “It is far past time to repeal it.”

During various times since 1998, Senator McCain has introduced legislation to either modify or repeal the Jones Act.