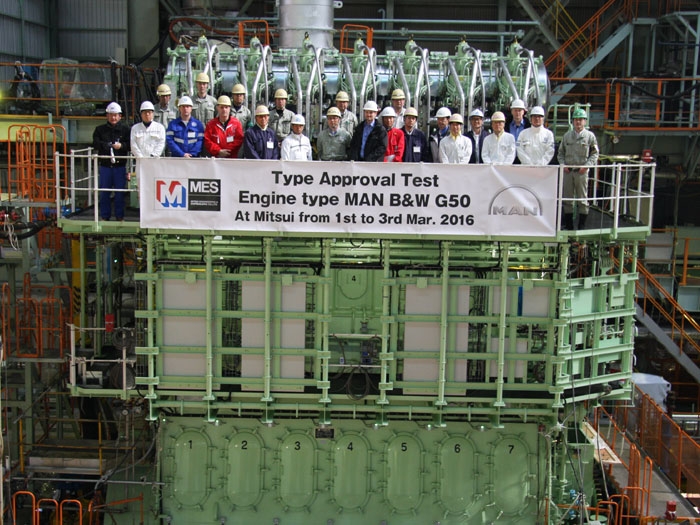 The flexible ME-GI engine will be able to operate not only on ethane, but also on HFO, MDO and gas oil.

Developed with an eye to reducing production costs, the G50-type has a lower weight and shorter length than its predecessor, while still producing the same power output.

In the TAT proceedings in Japan, which were overseen by classification society DNV-GL, the engine was tested as an ME-C type running on MGO, with its gas system also successfully completing a pressure and function test. The first test and operation on ethane gas will take place after aboard the 36,000 cu.m LEG carrier in Texas once ethane gas has been bunkered, after which the engine will officially be named a 7G50ME-GIE (Gas Injection Ethane) type.

This latest order brings the total of ethane-burning ME-GIE engines on order with MAN Diesel & Turbo to eight, with more reportedly in the pipeline.

The vessels differ fundamentally from conventional gas carriers, with the superstructures located at the bow. This gives an optimized distribution of weight and an accompanying reduced demand for ballast water, leading to reduced fuel consumption and emissions. A new “svelte” bow design enables the vessel to improve seakeeping at higher transit speeds and also improves fuel efficiency.

Propulsion efficiency is further improved by use of an MAN Kappel propeller with rudder-bulb system.

Another significant feature is the carrier’s innovative Star Trilobe tank that allows an increase in cargo capacity by nearly 30%, reducing shipping costs through economies of scale.