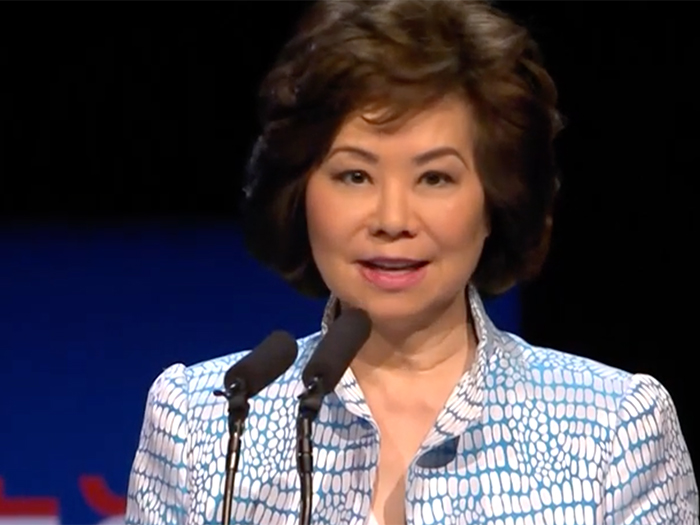 Secretary of Transportation Elaine Chao will reportedly resign Monday in the wake of yesterday’s events in which a mob of Trump supporters overran the Capitol.

The Hill newspaper quotes a letter from her to Department of Transportation staff as calling the incident “a traumatic and entirely avoidable event” and that “as I’m sure is the case with many of you, it has deeply troubled me in a way that I simply cannot set aside.”

Chao later tweeted the full text of the letter.

Rep. Peter DeFazio, Chair of the House Committee on Transportation and Infrastructure, today released the following statement after Transportation Chao announced her resignation:

“In announcing her resignation, Secretary Chao stated that she was troubled by the traumatic and avoidable events that transpired at the Capitol yesterday. On that, she and I agree very much—and while I believe she could send a stronger signal by joining efforts to invoke the 25th Amendment to remove this dangerous President immediately, I thank her for making it clear to the American people as well as the dedicated DOT employees she led for the past four years that the President’s actions were untenable.

“When it comes to the critical work at DOT, I’m counting down the days until I can get to work with President Biden, Secretary Buttigieg and the Democratically-led Senate on transformational legislation that not only finally addresses our country’s infrastructure crisis, but also tackles climate change and creates millions of jobs—something President Trump absolutely failed to do.”

U.S. Rep. Sam Graves (R-Mo.), Ranking Member of the Committee on Transportation and Infrastructure, released the following statement on the Chao resignation: