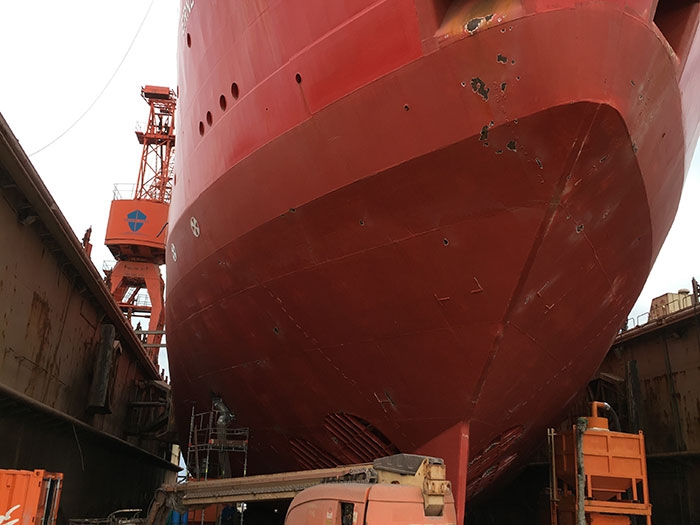 "Shackleton's hull condition is the best we have seen after typical ice year operations," says BAS

AUGUST 23, 2017 — Subsea Industries’ Ecospeed hull protection system will be applied to the hull of the 15,000 gt RRS Sir David Attenborough, the polar research ship under construction at the Cammell Laird shipyard in Birkenhead, Liverpool, U.K., for British Antarctic Survey (BAS).

The decision to apply the Ecospeed hard coating to the hull of the new polar ship has been validated by the recent drydocking of sister vessel RRS Ernest Shackleton. The 80 m long vessel, coated with Ecospeed in 2009, drydocked last month at the Orskov shipyard, in Frederikshavn, Denmark, where the hull was found to be in “very good condition.”

“Shackleton’s hull condition is the best I have seen after typical ice year operations,” said BAS Superintendent Andrew Webb, “We tend to account for touch up coats every other year to areas impacted by the ice, but this year we needed to repair even less surface area than expected, despite the vessel encountering heavy Antarctic ice.”

The Orskov Shipyard had to touch up areas in the bow and rudder areas. A touch up coat was last applied in 2015. Only remedial coats are required as Ecospeed is a one-coat system and does not need to be removed or reapplied.

The durability of the coating and the ease with which repairs can be effected were the reasons why BAS/NERC selected Ecospeed for the newbuild RRS Sir David Attenborough.

“The shipyard initially wanted to apply its preferred supplier’s coating system, but based on our experience of this coating on the James Clark Ross and Ernest Shackleton we wanted Ecospeed,” said Mr. Webb. “We already had this system on the entire hulls below the water line of both research vessels and found it much easier to repair: it doesn’t need to be applied under such strict environmental conditions or require the hire of any specialist application equipment.”

During 2013/14 BAS replaced a competitor system with Ecospeed across the entire hull of another polar vessel, James Clark Ross, which is scheduled to drydock this month (August).

RRS Ernest Shackleton, launched in 1995, is a logistics vessel used to transport cargo, fuel and passengers. The ship has basic scientific capability and undertakes research work in the Antarctic.

Built by Kverner Klevin Leirvik, Norway as the MV Polar Queen for the Rieber Shipping of Bergen she was deployed in the Antarctic by other national programs before being acquired by the British Antarctic Survey in August 1999.