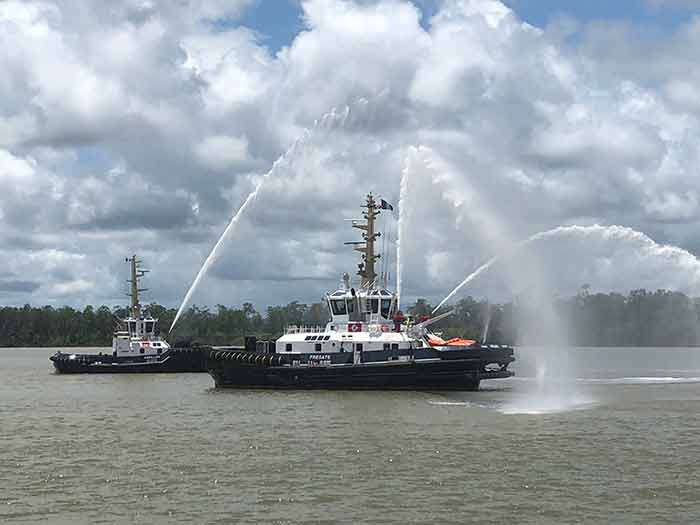 Fregate (in front) and Papillon during naming ceremony

SEPTEMBER 24, 2018 — Sliedrecht, Netherlands, headquartered Dutch Dredging (Baggerbedrijf de Boer) welcomed two new vessels to its fleet last week. The two newcomers were named the Fregate and the Papillon in a ceremony held in the port of Cayenne, French Guiana.

The vessels were delivered to Boer Remorquage SARL, a joint venture involving Dutch Dredging and Iskes Towage & Salvage. They will work in the ports of Cayenne and Kourou under a twelve-year contract that the consortium signed in 2016 with the Grand Port Maritime de Guyane. In addition to maintenance dredging work, both vessels will be used to assist shipping and as standby and fire-fighting vessels in emergencies.

The Fregate is the more unusual of the two. Built by Poland’s SAFE shipyard in Gdansk, the 29.2 m long Damen WID-Tug-2915-HYBRID is both a dredge (using the Air and Water Injection Dredging (AIRSET) method) and a tug.

The Papillon is the smaller of the two. The tug is 22.7 m long (212 gross tonnage) and was completed earlier this year by Damen Shipyards Hardinxveld in line with French regulations. The ASD Tug 2310 SD (shallow draft: 3.1 m) will mainly be used for assistance in Kourou.

Hugo van de Graaf, co-director of Dutch Dredging, said: “These two vessels are the result of exceptional teamwork. Our client had very specific requirements for the vessels, such as the combination of very limited draft and length with adequate bollard pull. Thanks to the professionalism of both our companies, all those things were achieved during the design process.”