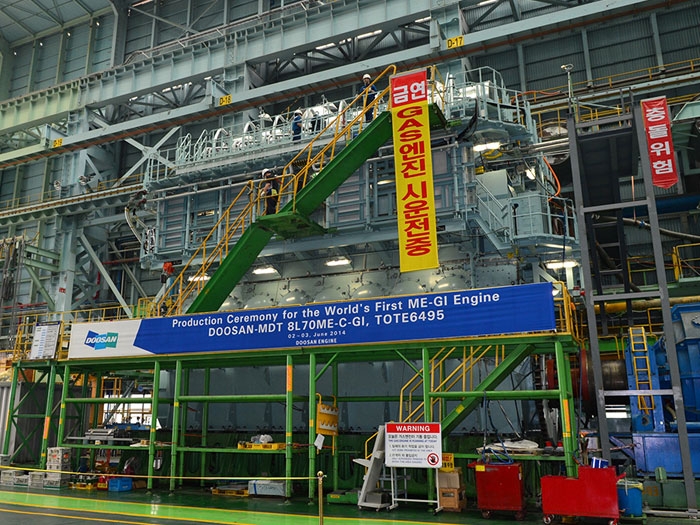 JUNE 23, 2014 — The ME-GI engine for the first of TOTE’s two LNG fueled 3,100 TEU containerships has been delivered to NASSCO’s San Diego shipyard by Korea’s Doosan Engine.

The MAN B&W 8L70ME-GI engine is world’s first dual-fuel, low-speed ME-GI and is capable of operation on LNG and/or bunker C oil, though the TOTE ships will primarily operate on LNG.

Doosan Engine won the order to build the ME-GI engines in 2013, since which time the first ME-GI unit has successfully passed through design, manufacture, and test-run stages. On June 3, 2014, Doosan Engine successfully completed the engine’s official trial run in the presence of the shipowner, shipyard, and classification society representatives.

Doosan Engine also tested the ME-GI’s Fuel Gas Supply System (FGSS), which has an operating pressure of 300 bar. At the culmination of two months of extensive testing, the gas system had passed all ABS and USCG requirements.