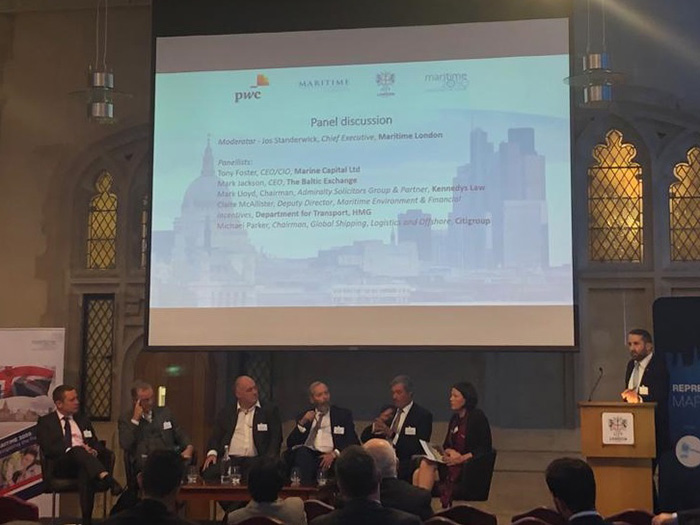 Report was released at start of London International Shipping Week 2019

Though the U.K. has long claimed a global lead in the provision of professional maritime services, it faces increasing competition from Singapore, the U.S., China and Norway. A new report from trade promotion bod Maritime London, launched at this week’s London International Shipping Week, aims to help the U.K. increase its market share.

According to trade promotion body Maritime London, the global market for these services – marine insurance, shipbroking, legal, finance and classification — is about $20 billion, with the U.K. taking a $6 billion slice of the pie.

Called “Catching the Wave,” the report has been prepared by consultancy PwC in support of the U.K. Government’s Maritime 2050 Strategy to provide a detailed roadmap of industry and government actions needed to strengthen the U.K.’s position in the maritime professional business sector.

It makes 36 recommendations — including the appointment of a government “shipping czar” to drive a campaign to attract more ship owners and charterers to the U.K.

The report’s initiatives are grouped under six headings:

Maritime London Chairman Lord Mountevans said: “This detailed report should inspire industry and government to build on the strengths of the U.K. maritime cluster and seize new opportunities. The global market for professional maritime services is worth $20bn and is growing. We must work together to enhance the U.K.’s leading position as the world’s top maritime services cluster. Changing trade patterns, new vessel types, digital technologies and green solutions all offer us the opportunity to grow our market share, expand our businesses and increase our contribution to the U.K. economy.”

Strengthen the core of ship owners and charterers

Government to create a “shipping czar,” a senior figure to drive more proactive government marketing of the sector and to engage with ship owners and charterers to encourage them to move to the U.K., demonstrating a hunger to have them here. The czar would coordinate between relevant departments, trade associations, and the MCA (Marine & Coastguard Agency), and have the authority to represent government to ship owners, acting quickly to coordinate and deliver assistance to owners looking to move to the U.K.

The U.K. has a significant lead in maritime dispute resolution and insurance. Recommendations include the development of legal frameworks for AI, autonomous vessels and carbon emissions to strengthen this position.

The U.K. has a marginal presence in ship financing following the exit of RBS and Lloyds from the market. Recommendations to revive ship finance include achieving dual listings of large shipping companies on the London Stock Exchange; developing London as the leading offshore centre for chinese currency based ship leasing and greater outreach to based institutional investors.

Extend the U.K.’s lead in technology

Measures to improve the adoption of digital technologies by the maritime sector including the creation of a government and industry backed fund focused on supporting innovation and the designation of maritime as a priority sector within existing government schemes.

The availability of skilled staff is a key driver of success for the maritime cluster. Ensure that post-Brexit visa and immigration rules mean that U.K. firms can recruit the best international staff as well as measures to increase the number of merchant officers, increase diversity and further internationalize the U.K.’s maritime colleges.

The positive effect of having multiple maritime service providers in one location needs to be further enhanced. Recommendations include working more closely with other European clusters, proactively engaging with developing economies and virtual clustering initiatives.

The report’s authors say that delivering the recommendations will require both government and authors to work closely together to implement them through a combination of work with the Department of Transport, the Treasury, the Department for International Trade and maritime associations.

A full copy of the report can be downloaded HERE