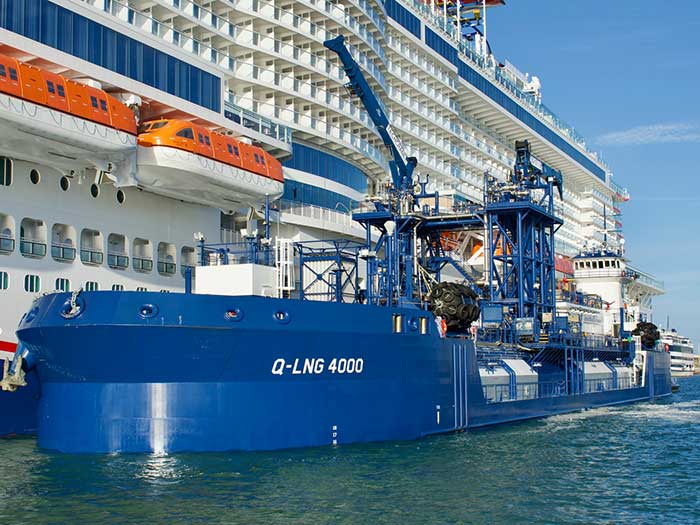 DNV sees the underlying growth for LNG as the alternative fuel of choice as very strong. [Image: QLNG]

DNV has issued a round up of 2022 orders for ships with alternative fuels using figures from its Alternative Fuels Insight (AFI) platform.

The total number of ships with alternative fuels ordered in 2022 was 275 (excluding battery operated vessels). In addition, more than 50 LPG carriers have been ordered with LPG dual fuel systems.

LNG led the way with 222 ships or 81 % of total orders. Seventy-four percent of these orders were for container vessels and pure car and truck carriers (PCTCs), while product tankers came in third representing 9% of orders.

Methanol was the second most popular alternative fuel choice, with 35 ships ordered, bringing the total count to 82 ships. Thirty of these were large container vessels.

Perhaps surprisingly a total of 18 ships capable of running on hydrogen fuel were ordered, ranging from small crew transfer vessels for the offshore wind industry which are built to operate fully on hydrogen, to large cruise vessels installing hydrogen powered fuel cells that cover a smaller portion of the energy demand onboard.

“A diverse portfolio of LNG fueled ships was delivered in 2022, with large crude oil tankers in the lead and container ships in second place,” said Martin Wold, principal consultant in DNV’s Maritime Advisory business. “Far from all are currently operating fully on LNG fuel but there are geographical pockets where LNG is still competitively priced and being bunkered regularly. The underlying growth for LNG fuel is nevertheless very strong and the market will likely return with a boom at some point, with bunkered volumes expected to triple within a very short time span.”

“Looking ahead, we expect 2023 to turn out similarly to 2022 in terms of newbuild orders for alternative fuels,” said Wold. “The orders will likely materialize across somewhat different ship types and sizes compared to last year, moving with the newbuild market in general.”

Similarly to 2022, the great majority of ships ordered with alternative fuels in 2023 is expected to be LNG dual fueled.

The elevated price levels for natural gas will continue to delay the widespread adoption LNG as fuel in the marine industry, however from a big picture perspective delivery times for newbuilds aligns well with when global gas and LNG prices are expected to cool down.

According to Wold’s analysis, orders for methanol dual fuel are also likely to continue, and possibly grow somewhat in terms of number of ships. Compared to LNG, methanol fuel systems are less costly and easier both for the shipyard to fit – in particular on smaller vessels – and for the owners to operate. 2022 was the year in which methanol really established itself as an alternative to LNG and engine makers report about record high interest for methanol capable engines.

“Concerns around sourcing and the scalability of green methanol in the short to medium term will remain the main slowing factor here,” said Wold.

While the main competition will be between conventional fuels, LNG and methanol in 2023, DNV expects to see a further positive trend for the ordering of hydrogen fueled ships. DNV is also expecting to add the first officially confirmed ammonia fueled ship to its AFI database this year.”