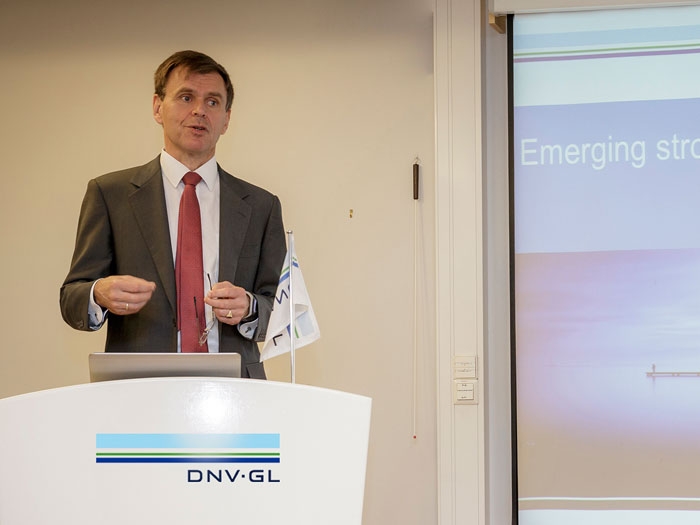 JUNE 1, 2015 — Hybrid propulsion systems and connected ship solutions are emerging technologies that are gaining ground faster than expected, according to Tor E. Svensen, CEO DNV GL – Maritime, giving an update on the classification society’s Shipping 2020 report which was published in 2012.

“While operational efficiency and emissions reductions are the main motivators behind these developments, the update shows that the future fuel mix will be much more diverse,” Mr. Svensen said.

Though LNG as a ship fuel was one of the standouts in the 2012 report, its prediction of up to 1,000 LNG-fueled vessels by 2020 will most likely not be met, due to continuing high investment costs and slower development of infrastructure. However, as more bunkering options come in place, growth could accelerate, said Mr. Svensen.

In contrast, the scrubber market is developing faster than expected, with more than 200 confirmed projects. The earlier report had seen them as a regulatory compliance option that would not be a significant option until after 2020 and the introduction of tighter global restrictions on sulfur.

The rise of hybrid vessels was unanticipated in the original “Shipping 2020” report, Mr. Svensen noted. But a substantial drop in battery prices and improved energy storage capacity means that hybrid systems are now becoming a real option for the shipping industry. They are best suited for vessels with large variations in power demand, coastal trades and operations within emission control areas.

The technology is also becoming applicable for some deep-sea shipping segments, for example in crane operations. Pilot projects indicate that hybrid technology is robust and leads to fuel savings of 15% for an offshore vessel. A hybrid engine system allows the ship to operate at its most efficient point, regardless of power requirement or load.

“Currently, there are already 33 hybrid vessels in operation or on order, and looking ahead it is possible this number will top 100 by 2020,” Mr. Svensen said.

Global high-speed internet coverage, increased computing power and Big Data solutions are turning the vision of the connected ship into reality and Mr. Svensen expects that the spread of these technologies will enable the shipping industry to intensify its focus on enhancing operational efficiency.

“By bringing together and analyzing both data from on-board monitoring systems and from external sources, a comprehensive insight is gained of voyage, engine and hull performance”, he said. “Voyage management based on shipboard sensors and AIS data, for example, can help to determine the optimal speed in all conditions and thereby reduce fuel bills.”

While enhanced safety through sensors and automation on board is another advantage of connected ships, the robustness and reliability of software dependent systems has to be assured. Applying Integrated Software Dependent Systems (ISDS) standards and verifying reliability through Hardware-in-the-loop (HIL) testing is therefore growing in importance.

“Originally used for mobile offshore drilling units, we expect that ISDS standards and HIL testing will play a greater role for shipping in the near future – at first in some of the offshore vessel segments as well as for large passenger ships,” Mr. Svensen said.

“As ships become more connected, they could fall victim to cyber attacks,” Mr Svensen warned. He recommended the development of guidelines and standards together with cybersecurity audits to improve systems protection.