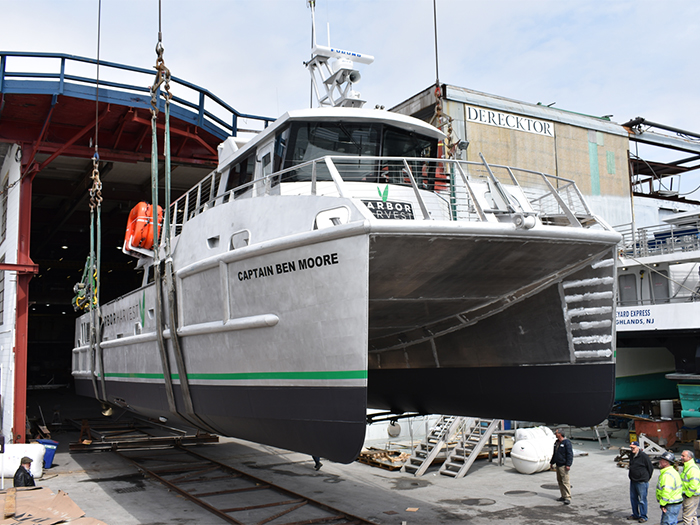 Derecktor’s first two hybrid cats were research vessels, but this third vessel, called the Captain Ben Moore, will be the first hybrid cargo vessel built in the U.S.

It is under construction for Harbor Harvest, a Norwalk, Conn., based company. set on changing the way fresh produce and foods are transported around metro areas. Once in service, the Captain Ben Moore will carry goods from family farms and small producers in the region across Long Island Sound, relieving traffic congestion and reducing emissions.

The vessel will have a top speed of 15 knots and offers 300 square feet of open cargo space, 100 square feet of covered space and 140 square feet of walk-in refrigerated space. Total capacity is 12,000 pounds of cargo or the equivalent of three to five full truckloads, according to Harbor Harvest founder Bob Kunkel.

As the third hybrid built by Derecktor featuring a lithium battery system at the heart of the power plant, the Captain Ben Moore further establishes Derecktor as a U.S. leader in commercial hybrid vessel building. The shipyard, long known for innovation in construction of yachts, commercial and military craft, has a commitment to the development of sustainable solutions for marine transport.

“We’re very proud of these boats”, commented Derecktor President Paul Derecktor at the launching. “For over 70 years we have been part of the maritime community, and playing a part in protecting the Long Island Sound and New York Harbor environments is very satisfying.

“It’s also been a pleasure working with Harbor Harvest, a company that is pioneering the rebirth of clean marine transportation”.