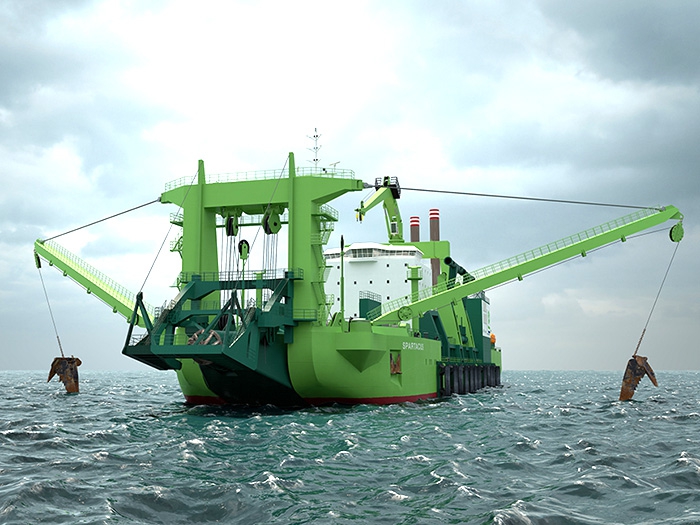 MARCH 1, 2017 — Belgium’s DEME Group has ordered a mega cutter suction dredge (CSD) from Royal IHC in the Netherlands featuring a combination of power, size and innovations that will see it “create its own market, by achieving what has been impossible.”

To be named Spartacus and delivered in the summer of 2019, the 164 m LNG-fueled vessel will be the most powerful cutter suction dredge ever built with a total installed power of 44,180 kW. This will enable her to cut harder soils at speeds that have not been possible before. This means that works can be taken on by the cutter dredge that would previously have required the use of dynamite and blasting.

Spartacus will have a heavy-duty cutter ladder and will be able to dredge in waters of up to 45 m, compared to the 35 m depth that is presently the upper limit in the market.

The dredge will be capable of operating in very remote locations with limited infrastructure, given her fuel autonomy and accommodation capacity.

The 164 m long Spartacus will be the world’s first LNG-fueled cutter suction dredge and follows DEME’s orders for the first LNG-powered trailing suction hopper dredges Minerva and Scheldt River. It will have a Green Passport and Clean Design notation.

Other innovations on board will imcludea waste heat recovery system that converts heat from the exhaust gases to electrical energy.

Shipbuilder Royal IHC says that the concept and basic design for the vessel cutter resulted from a close cooperation with DEME and Vuyk Engineering Rotterdam (a 100% subsidiary of IHC).

The four main diesel engines will run on LNG, MDO and HFO, and the two auxiliary engines will have dual-fuel technology.

“We can state that this CSD is the largest and most complex that IHC has ever built,” says IHCs CEO Dave Vander Heyde. “The combination of power, size and innovations makes it a true challenge to build. We are proud and honored that DEME has again placed their trust in us. We also want to thank them for giving us the opportunity to build the world’s first LNG-powered cutter suction dredger. We are pleased to note that IHC’s strategy, which focuses on developing and producing high added value equipment, and integrated vessels is starting to pay off. Being able to manage all the gigantic forces of this CSD with our high tech equipment and systems perfectly supports this.”