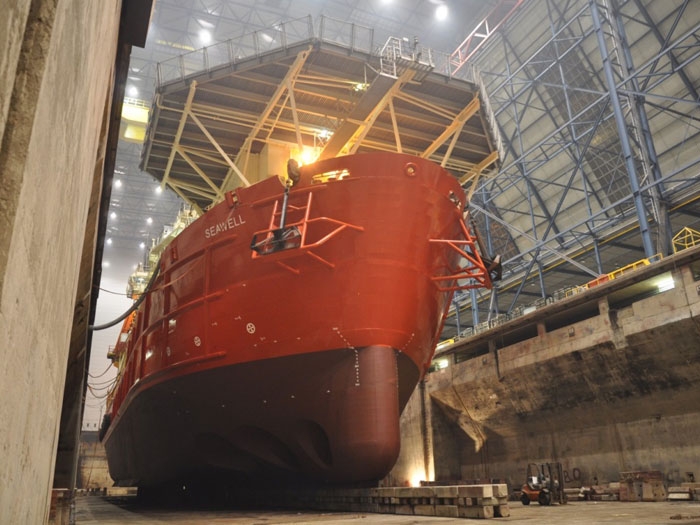 MSV Seawell seen during an earlier visit to Damen Vlissingen

NOVEMBER 26, 2014 — Damen Shiprepair Vlissingen, Netherlands, has been awarded a contract by the U.K. unit of Helix Energy Solutions that will see it carry out a major upgrade of the light well intervention and dive support vessel MSV Seawell.

This follows earlier contracts for Helix that saw the shipyard dock and repair the MSV Seawell in 2012 and the DSV Well Enhancer earlier this year.

The Seawell is expected at the shipyard in the second half of December 2014.

As the upgrade will be executed over the winter season, Damen Shiprepair Vlissingen will perform the work in its covered dry dock which has a 300 tons overhead crane.

“Continuous work without weather delays are of the essence for such project. This in combination with the proven track record DSV has with Helix were decision making factors,” says Edwin Ruppert,  Area Manager UK for Damen Shiprepair & Conversion.

The upgrade includes an exchange of all six gensets including new foundations, overhaul of all thrusters and azimuths, replacement of two cherry pickers and the existing twin slewing cranes by a new single boom 50 t crane with active heave compensation. All switchboards will be renewed and the accommodations will also receive attention.

One major item will be the demolishing of the existing derrick and installment of a new derrick with all associated equipment.

In addition adjustments will be made on the functioning and operation of the moon pool doors, winches and other equipment.

Statutory docking items will also be undertaken during the refit period.