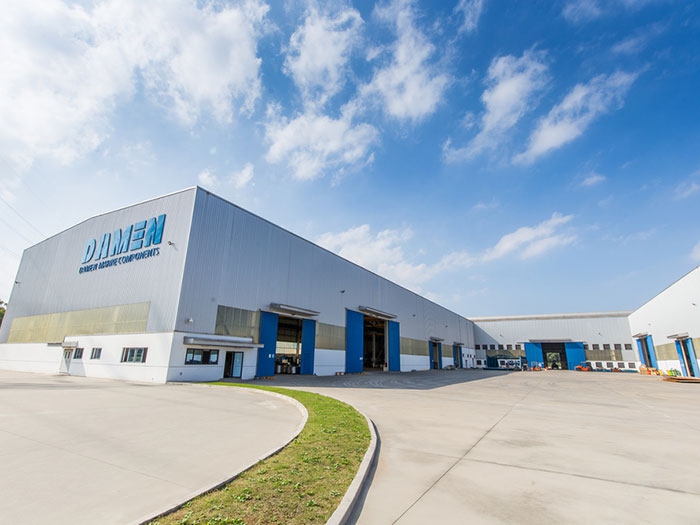 JUNE 7, 2018 — Damen Marine Components’ (DMC) production facility in Jiangyin, China, has received the official certificates for its ISO 9001-2015 and ISO 14001-2015 awards following an audit earlier this year. This brings it into line with the other DMC locations in the Netherlands and Poland.

DMC has had a presence in China since 2005, and the brand-new facility at Jiangyin was opened in November 2015. With a production area totaling 11,000 sq.m divided over five halls, it has all the facilities needed to develop and manufacture products including nozzles, rudders, special constructions and winches. The plant is also equipped with production systems that include its own spinning systems for propeller nozzles and state-of-the-art grinding and sanding robots.

ISO 9001-2015 specifies the requirements for a quality management system (QMS) and for DMC to demonstrate its ability to consistently provide products and services that meet the requirements of its customers and regulators. Specific reference in the certificate is given to the production of marine components including propeller nozzles, winches, rudders, stern tubes, guide posts, and tunnel and propeller brackets.

ISO 14001-2015 specifies the requirements for an effective environmental management system (EMS) and demonstrates the establishment by DMC Jiangyin of a framework that it follows, with reference to the same product group as ISO 9001-2015.

“We are very pleased to have completed this process successfully,” said Aart Vogelaar, General Manager at Damen Marine Components Jiangyin. “This demonstrates to all our stakeholders that this is a well organised and high performing company, and provides reassurance to our customers that we operate to the highest standards and are subject to regular audits by Bureau Veritas. I am also pleased to say that, given that we already conformed to the practises and processes used by the other DMC locations, we did not need to take any special actions to ensure certification.”