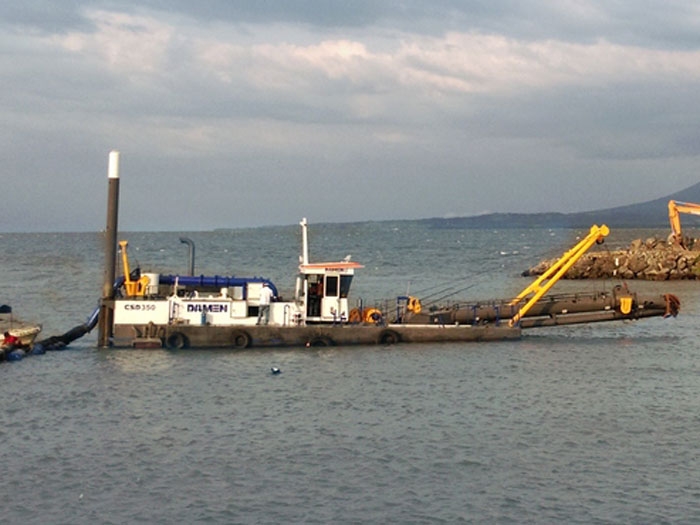 FEBRUARY 19, 2015 — A Damen CSD350 cutter suction dredge is to play a major role in a project aimed to boost the Nicaraguan tourism industry by creating and maintaining a 200 km inland channel running along a section of Nicaragua’s Caribbean coast.

This is the first Damen CSD to be purchased by INTUR, and is designed for heavy-duty operations with a production capacity of 2,000 cu. m/h to a depth of 9 m.

The dredge will be operated by Empresa Portuaria Nacional (EPN), the national port authority, which already manages a number of Damen vessels and has a close relationship with INTUR. The CSD350 will be the fourth vessel delivered to EPN over the past year; with a Stan Tug 2608, another CSD350 and a CSD250 all recently beginning operations in Nicaragua.

The CSD350 will be deployed on an ambitious project to create a continuous 200 km channel running parallel to the sea between Bluefields and Bilwi, connecting the north and the south of the country.

The existing waterway is a mix of rivers, lakes and some manmade channels running through lagoons and mangrove swamps. However, the rivers and lakes require dredging and the channels need to be completed. In addition, midway along the channel near Karawala, a completely new waterway of around 22 km will be created to link the northern and southern sections. Once completed, the new channel will enable larger and more comfortable boats to use the route and so encourage the local tourism industry.

The coast is renowned for its beauty and biodiversity, and a series of environmental studies have been undertaken to ensure minimal impact on the local plants and wildlife. An environmental management plan has been created for the project and it will be overseen by a government management team to ensure full compliance.

As an example of the care being taken over conservation of the environment, the dredging spoil will be used to construct a series of islands which will then be planted with trees to provide additional natural habitats.

Once the channel has been dredged along its full length by the new CSD350, the dredge will be used to maintain it.

The vessel is scheduled to arrive in Nicaragua at the beginning of April, equipped with all the necessary equipment to operate in this very remote area, , including a 1000 m pipeline.

“We’re very pleased to be supplying another cutter suction dredge to Nicaragua,” said Pieter Becker, Damen Sales Manager for Central America. “The close cooperation between INTUR and EPN has been a major factor in this success. Built to the same specification as the other CSDs in the EPN fleet, the dredge will provide a proven and cost-effective solution to INTUR’s dredging requirements.”