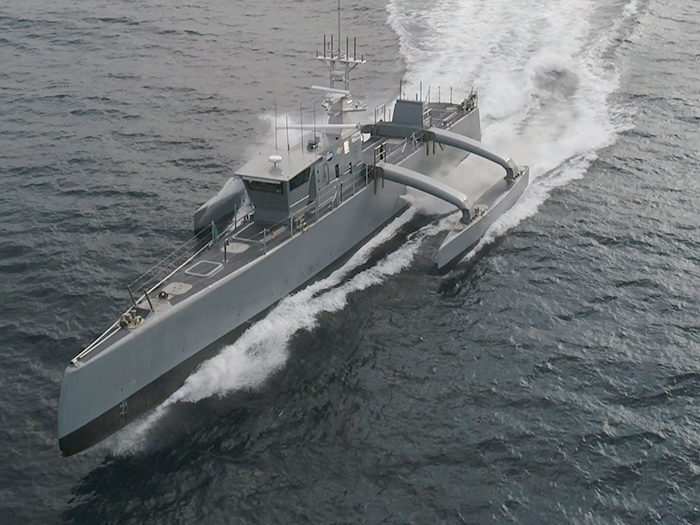 The surprise item in the Navy’s FY2020 budget submission was a request for funding for two large unmanned surface vessels.

Now the Congressional Research Surface has issued a report, Navy Large Unmanned Surface and Undersea Vehicles: Background and Issues for Congress, that puts that request in context. And it seems that those two vessels are the first step towards a future Navy with proportionately fewer large surface combatants, more small surface combatants — and the addition of significant numbers of unmanned vessels.

“The Navy wants to employ accelerated acquisition strategies for procuring these large UVs, so as to get them into service more quickly,” says the report. “The emphasis that the Navy placed on UV programs in its FY2020 budget submission and the Navy’s desire to employ accelerated acquisition strategies in acquiring these large UVs together can be viewed as an expression of the urgency that the Navy attaches to fielding large UVs for meeting future military challenges from countries such as China.”

The CRS says that the LUSV program is a proposed new start project for FY2020. The Navy wants to procure two LUSVs per year in FY2020-FY2024.

The Navy wants LUSVs to be low-cost, high-endurance, reconfigurable ships based on commercial ship designs, with ample capacity for carrying various modular weapons. Reportedly, the Navy envisions them as being 200 feet to 300 feet in length and having a full load displacement of about 2,000 tons.

The MUSV program began in FY2019. The Navy plans to award a contract for the first MUSV in FY2019 and wants to award a contract for the second MUSV in FY2023. The Navy wants MUSVs, like LUSVs, to be low-cost, high-endurance, reconfigurable ships that can accommodate various payloads. They would have a length of between 12 meters (about 39 feet) and 50 meters (about 164 feet). The Navy wants to pursue the MUSV program as a rapid prototyping effort, says the report.

The Extra-Large Unmanned Undersea Vehicles ( XLUUV) program, also known as Orca, was established to address a Joint Emergent Operational Need (JEON), says the report. The Navy wants to procure nine XLUUVs in FY2020-FY2024. The Navy announced on February 13, 2019, that it had selected Boeing to fabricate, test, and deliver the first four Orca XLUUVs and associated support elements. On March 27, 2019, the Navy announced that the award to Boeing had been expanded to include the fifth Orca.

The Navy’s large UV programs pose oversight issues for Congress that include those relating to the analytical basis for the more-distributed fleet architecture; the Navy’s accelerated acquisition strategies and funding method; technical, schedule, and cost risks; the proposed annual procurement rates; and the industrial base and personnel implications.