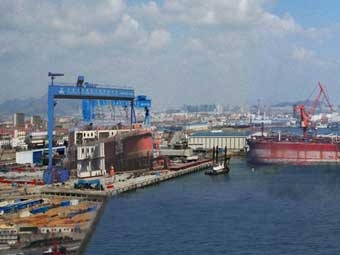 OCTOBER 18, 2013 — Chinese shipbuilding giant COSCO issued a flurry of announcements this week reporting additions to its orderbook, but also had some the not-so-great news concerning a $500 million DP3 deepwater drillship under construction at COSCO Dalian Shipyard for Dalian Deepwater Development (see earlier story).

This project has a checkered history: the hull of the vessel and certain equipment were originally built and installed by Cosco Dalian under a contract with Norwegian OTC listed MPF Corp. Ltd., which went bankrupt in 2008. MPF had hoped to build a fleet of Multi Purpose Floaters, combining drilling and production, storage and offloading (FDPSO) for ultradeep waters. Cosco Dalian acquired the hull and equipment in an asset sale conducted as part of the MPF insolvency process.

Yesterday, Cosco said that Dalian Deepwater Development served a notice on the shipyard August 5 to terminate the Contract based on alleged grounds of delay in the delivery of the Vessel, the construction of which is substantially completed.

On September 5, the shipowner submitted a request for arbitration in London claiming a refund of the first installment paid on the contract amounting to US$110 million and other advances paid by the shipowner together with interest thereon, damages and interest thereon, indemnity for future losses, further or other relief and costs.

On October 7, the shipowner rejected COSCO Dalian’s without prejudice proposal to settle the matter.

COSCO Dalian has has appointed legal advisers in London in relation to the arbitration and is responding to the request for arbitration accordingly.

COSCO says that, since COSCO Dalian got the notice of termination of the contract, several potential buyers have expressed interest in the vessel.

On the brighter side of things, among the new contracts announced by COSCO this week is one worth $106 million that will see COSCO Dalian build a jack-up for an Asian order with delivery scheduled for third quarter 2015.

Another new contract, valued at over RMB 325 million (about $53 million) will see COSCO Dalian build a 30,000 DWT cargo and training ship for a Chinese buyer.

And the second of two contracts placed with COSCO Nantong for the conversion of one semi-completed hull to high end floating accommodation unit valued at over USD $170 million has been declared effective.