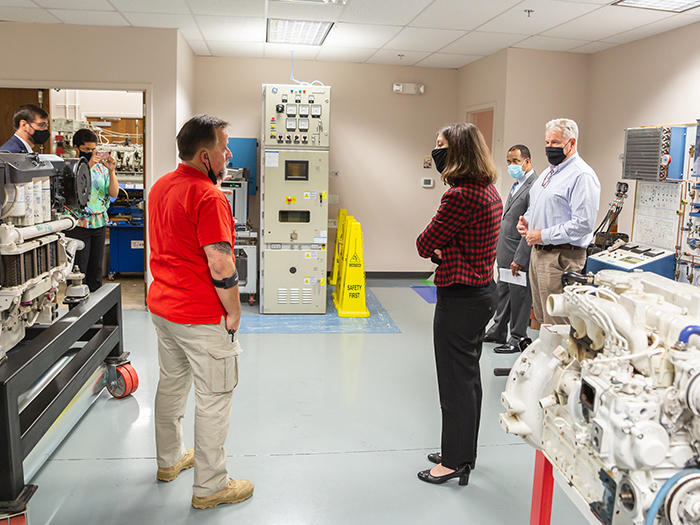 MAMA offers over 90 USCG-approved deck courses and engineering classes, Its ‘=offerings includes a Military to Mariner program, something of particular interest to Luria, who currently serves on the House Armed Services Committee and the House Committee on Veterans’ Affairs, after previously serving two decades in the Navy, retiring with the rank of Commander.

“We are exceptionally pleased to have hosted Congresswoman Luria and her staff as MAMA guests,” said MAMA president Captain Ed Nanartowich. “She has a distinguished career as a naval officer and a deep and sincere interest in advancing the lives and careers of other service members, veterans and mariners alike. Rep. Luria came to understand the importance of the work we do here, which is no less than training the next generation of mariners.”

Rep. Luria graduated from the U.S. Naval Academy and received a Master’s Degree in Engineering Management from Old Dominion University. She served at sea on six ships as a nuclear-trained Surface Warfare Officer, deployed to the Middle East and Western Pacific, and culminated her Navy career by commanding a combat-ready unit of 400 sailors. She was one of the first women in the Navy’s nuclear power program and among the first women to serve the entirety of her career in combatant ships. Rep. Luria continues her work by leading the House Veterans’ Affairs Subcommittee on Disability Assistance and Memorial Affairs, and is Vice Chair of the House Armed Services Subcommittee on Seapower and Projection Forces.