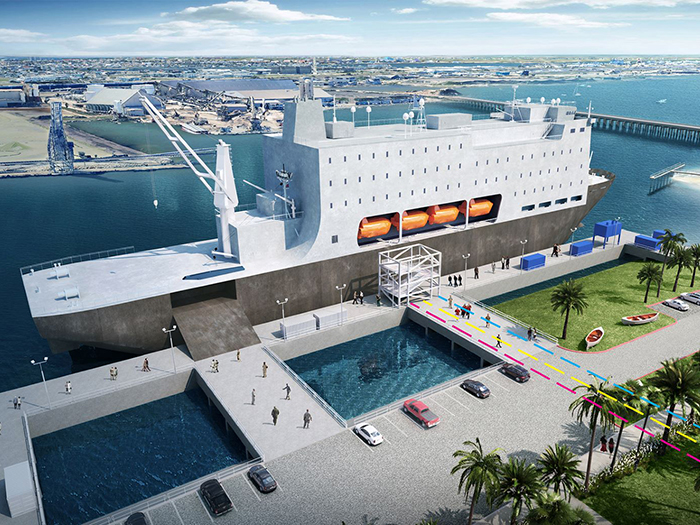 The massive spending measure just approved by Congress includes $390 million to fund construction of a fourth National Security Multi-Mission Vessel (NSMV), which will be assigned to the Texas A&M Maritime Academy at Texas A&M University at Galveston.

“Investment in the Gulf Coast’s only state maritime academy is essential to strengthening Texas’ maritime industry, which provides billions in economic support to the state and ensures rapid response capabilities in the most hurricane-prone region of the United States,” said John Sharp, Chancellor of The Texas A&M University System. “We are grateful to the Texas congressional delegation, state elected officials, former students and industry leaders for their support in securing this resource.”

The NSMV series is a new class of purpose-built ships to replace the aging and outdated fleet of training vessels used by state maritime academies to provide required at-sea training and to secondarily serve as disaster response and relief vessels. The 525-foot ship is outfitted with eight classrooms, a full training bridge, lab spaces, an auditorium, space available for hospital facilities roll-on/roll-off ramps, cargo crane and berths for 600 cadets and up to 1,000 humanitarian workers.

“This ship will not only provide student cadets with next-generation maritime training, but will also support humanitarian relief missions,” said Michael Young, president of Texas A&M University. “Selfless service is a core value of Texas A&M, and we look forward to the honor of serving others for many years to come.”

“Having the ability to live, learn, and train together as a single unit is essential to meeting our mission in educating and training the next generation of merchant mariners who go on to serve in both our armed forces and the maritime industry,” said Col. Michael E. Fossum, Vice President of Texas A&M University, Chief Operating Officer of the Galveston Campus and Superintendent of the Texas A&M Maritime Academy. “We’re excited to be able to do so in just a few years on a vessel that is the pinnacle of industry standard. We’re incredibly grateful to MARAD and the Department of Transportation for their stewardship of the NSMV program.”

In addition to being an educational platform for the Texas A&M Maritime Academy, the vessel is a national asset capable of responding to humanitarian and disaster response and relief efforts, which is critically needed in the Gulf of Mexico. Texas A&M-Galveston’s central location along the Gulf Coast and in the heart of an international port makes an ideal staging area for response and relief efforts.

“While the ship will serve as a state-of-the-art classroom for the maritime program at Texas A&M University at Galveston, it will also provide a key mission capability for disaster response along the Gulf Coast—able to respond to emergencies in other states and U.S. territories—and will provide a needed emergency response resource to Texas and the gulf,” said Nim Kidd, chief of the Texas Division of Emergency Management and Vice Chancellor for Disaster and Emergency Services.