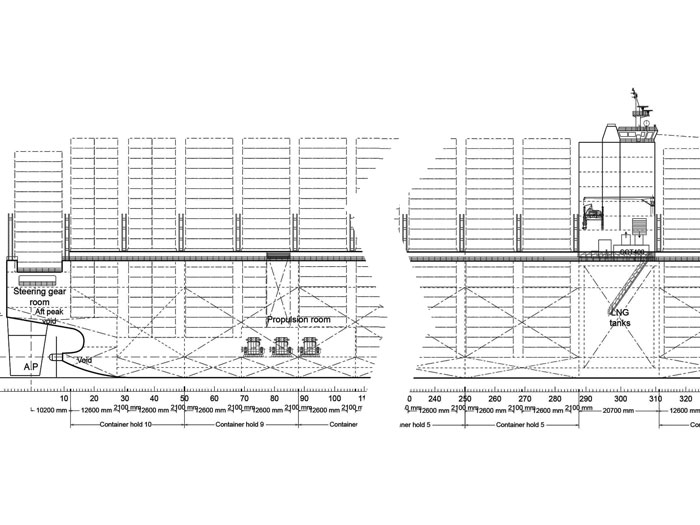 They have dubbed the vessel the "Piston Engine Room Free Efficient Containership" (PERFECt).

Essentially, the concept ship takes advantage of the flexibility of electric drive to use space previously occupied by the main to carry cargo, more than offsetting the extra volume required by the LNG fuel tanks in comparison with conventional HFO tanks.

A comprehensive analysis with the DNV GL COSSMOS tool simulated components of the power production and propulsion system to analyze the COGAS system, making it possible to get detailed data for the calculation of the overall fuel efficiency for a complete round voyage.

Using a global FEM analysis, the project partners also evaluated the impact of the changes that were made to the general arrangement.

The two 10,960 cu.m LNG fuel tanks are located below the deck house, giving the vessel enough fuel capacity for an Asia/Europe round trip.

With the gas and steam turbines integrated at deck level within the same deck house as the tanks, space normally occupied by the conventional engine room can be used to increase cargo capacity significantly.

The dissociation of electric power generation from electric propulsion allows the electric power plant to be moved away from the main propulsion system, giving a great deal of flexibility. In fact, say the partners "an engine room is not needed any more."

The three electric main motors, which are arranged on one common shaft, can be run fully independently of each other providing increased redundancy and reliability and a high level of safety.

With gas turbine-driven power production utilizing a very clean fuel as well as electric propulsion, the ship's machinery systems will be simplified and more robust. This approach is also expected to lead to new maintenance strategies, already common practice in aviation, that would enable shipping companies to reduce the ship's engine crew and save costs.

The study also suggests that optimizing the power plant through minimizing the steam turbine size, reducing power capacities, condenser cooling, and using a two-stage pressure steam turbine and steam generator will increase the system's efficiency further. The next phase of the study aims to optimize the propulsion system and ship design to attain even greater efficiency and increased cargo capacity.

As part of the analysis, costs for additional and reduced systems to the base case ship (CMA CGM's 20,000 TEU Marco Polo) were considered.Additional costs included:


Costs that could be eliminated or reduced in compared to the two-stroke engine system included:

At the end, the CAPEX (capital expenditure) for the COGAS ship are seen as being to be 20% to 24% above those for a conventionally-fueled vessel.

The OPEX (operating expenditure) costs largely depend on the difference in fuel price, the additional income related to the additional containers which can be transported and the savings related to a possibly higher system efficiency.

On the basis of the current gas price in Europe, which is nearly the same as the HFO price a business case in comparison with a two stroke ship using HFO plus scrubber as a reference therefore "needs compensation either by a larger difference between gas and LNG price or by additional benefits from efficiency improvement and additional revenue from additional container slots."

Still, the partners say that the results of the feasibility study, including the CAPEX and OPEX calculations, encourage them to plan a more detailed evaluation of the overall system in a follow-up project.

OCTOBER 28, 2015 – A technical and feasibility study for an LNG fueled mega box ship envisages an electrically driven ship powered by a combined gas and steam turbine (COGAS) system, in which steam is generated using heat from the gas turbine.