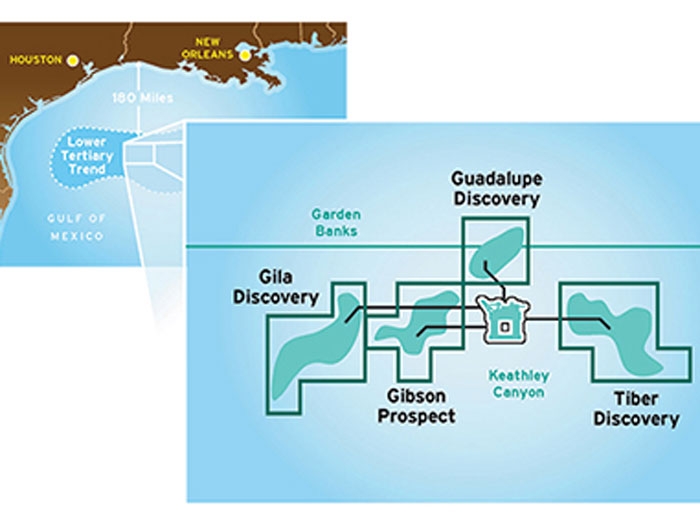 Chevron, BP and ConocoPhillips plan to work together in the northwest portion of Keathley Canyon in the U.S. deepwater Gulf of Mexico

JANUARY 28, 20015 — Chevron Corporation (NYSE: CVX) reports that subsidiary, Chevron U.S.A. Inc., will work with BP Exploration and Production Inc. and ConocoPhillips Company  to explore and appraise 24 jointly-held offshore leases in the northwest portion of Keathley Canyon in the deepwater Gulf of Mexico. Chevron will be the operator.

Chevron, BP and ConocoPhillips plan to work together in the northwest portion of Keathley Canyon in the U.S. deepwater Gulf of Mexico.

“Chevron has a proven track record for delivering superior results in complex deepwater developments,” said Jay Johnson, senior vice president, Upstream, Chevron Corporation. “We will work with our co-owners to evaluate how to develop these leases, along with our recently announced discovery at Guadalupe.”

The transaction encompasses the Tiber and Gila discoveries, and the Gibson exploratory prospect. Chevron recently acquired an interest in Tiber and Gila from BP. Chevron, BP and ConocoPhillips already held interests in the Gibson prospect.
The scope of the collaboration between Chevron, BP and ConocoPhillips includes further exploration and appraisal of these leases as well as evaluating the potential of a centralized production facility, which would provide improved capital efficiency, similar to Chevron’s Jack/St. Malo project.

Chevron, BP and ConocoPhillips also plan to work together to achieve efficiencies in schedule, realize cost savings, and optimize the use of human resources.

“Chevron has a leading position in the deepwater Gulf of Mexico,” said Jeff Shellebarger, president, Chevron North America Exploration and Production Company. “By collaborating across several prospects and discoveries, and incorporating the technologies and experience of the three companies, we expect to develop these fields in the most cost effective way and shorten the time to final investment decision and first production.”

The recently-announced discovery at Guadalupe, located adjacent to Keathley Canyon, could also be developed by utilizing the centralized production facility.  Chevron, BP, and Venari, the Guadalupe co-owners, will evaluate this possibility during the upcoming appraisal phase of that discovery.