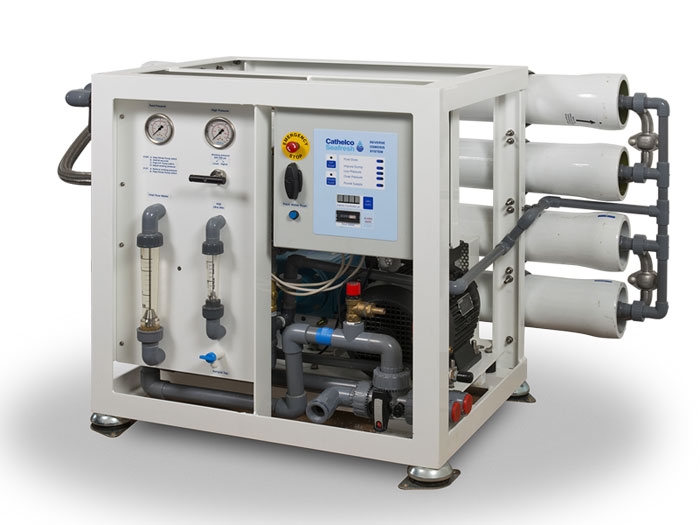 APRIL 25, 2016 — Chesterfield, U.K., based Cathelco reports that its desalination division is continuing to win orders worldwide for its range of space saving watermakers.

These include the first Cathelco desalinators supplied to the U.S. Navy’s Military Sealift Command. They have been installed on the MV Capt David.I.Lyon, a containership that supports U.S. Air Force missions and the MV LTC John U.D Page which provides ocean transport to sustain U.S. Army operations. The ships are being equipped with Cathelco T35 desalinators that can produce up to 35 tonnes of freshwater per day for a wide range of domestic uses.

One of Cathelco’s latest orders is from Norway’s Havyard Ship Technology which is building a Havyard 832 SOV wind turbine service vessel for the Danish shipping company Esvagt.

Cathelco is supplying Havyard with a T30 desalinator that has the capacity to produce up to 30 tonnes of fresh water per day for a full range of washing and cleaning requirements. The units provide a high output for their size and are ideal for installation where space is limited, whilst allowing good access for routine maintenance.

Another order has come from Amsterdam based Reederei Nord B.V. which has purchased desalinators for two oil/chemical tankers, the Nord Isle (12,810 dwt) built in 2009 and a sister ship Nord Ocean which entered service a year later.

Both vessels will be installed with Cathelco H2016 desalinators which can produce up to 6.5 tonnes of potable water per day. Compactly designed, the units are ideal for retrofitting and have diagnostic systems to continually monitor the quality of the water.

In Australia, two Cape Class patrol vessels under construction by Austal at its Henderson, WA, shipyard are each being installed with two Cathelco H2012 desalinators. These will provide 10 tonnes of fresh water daily for up to 18 crew members.

In Poland, one of the most distinctive vessels in the history of Remontowa Shipbuilding will be installed with two Cathelco desalinators. This is the El-Mellah, a three masted frigate which is being built as a sail training vessel for Algerian Navy cadets. With a length of 110 metres and a main mast 54 metres high the ship can accommodate more than 200 people.In addition to providing two desalinators, each with the capacity of producing 16 tonnes of freshwater per day, Cathelco is supplying an impressed current cathodic protection (ICCP) system to safeguard the vessel’s steel hull against corrosion.

“Cathelco offers a portfolio of products to the marine industry and we are delighted to have supplied two types of systems for this very impressive vessel,” says Chris Bell, general manager of the company’s desalination division.