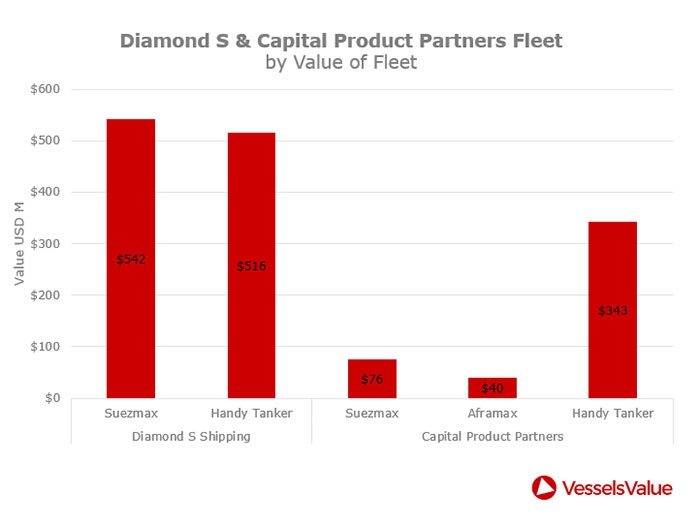 NOVEMBER 28, 2018 — Capital Product Partners L.P. (NASDAQ: CPLP) and privately held DSS Holdings L.P. have entered an agreement that will see Capital Products spin off its crude and product tanker business into a separate publicly listed company, to be called Diamond S Shipping Inc., which will merge with DSS’ businesses and operations in a share-for-share transaction.

, CEO of DSS, will serve as the CEO of Diamond S Shipping Inc.

The merged fleets will own the world’s second biggest Handy Tanker fleet, owning a combined 52 vessels. The only larger Handy Fleet in the world is owned by publicly listed Danish shipowner Torm.

VesselsValue sees the merger as being most significant in the MR2 tanker market. The trading areas of the two fleets is varied, CPLP appears to bring commercial relationships with operators well entrenched in the Latin American market, particularly Brazil.

Diamond S MRs see more activity in the U.S. Gulf, Singapore, and the far east. Regardless of who is ultimately fixing these ships on a day to day basis, the merger now creates an owner with a global footprint in the clean tanker markets, says VesselsValue’s Court Smith, noting, “we appear to be at the bottom of a market cycle for MR tankers, leaving plenty of upside for the asset value of the underlying vessels.”