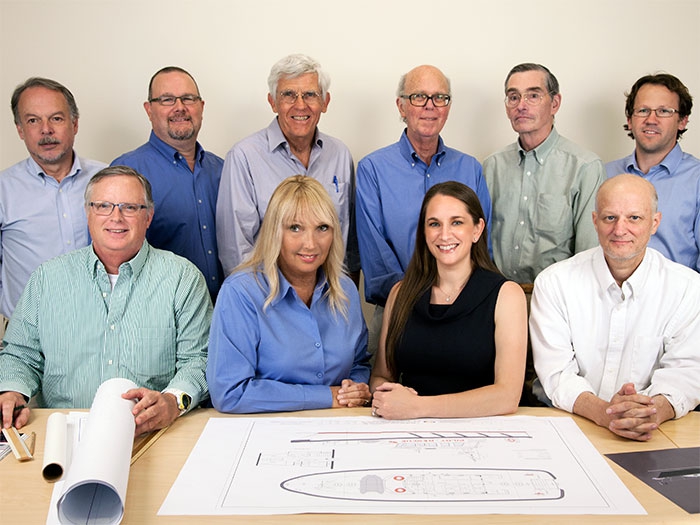 “Ray Hunt was a genius, able to intuitively know how boats work and with the courage to experiment,” says the firm’s President, Winn Willard. “We have taken Ray’s ideas and applied them, honing our expertise and knowledge from the days of the early deep-v hulls. Now we have an 11-meter RIB on virtually every large ship in the U.S. Navy, designed the vast majority of American pilot boats, and helped boat builders develop new products in new markets across the marine industry

Ray Hunt’s innovative approach to design resulted in several transformative designs in the 1950’s and 1960’s. The Boston Whaler 13 and the Bertram 31 changed the paradigm of the fast powerboat. The Concordia Yawl and the 5.5-meter sailboats were trophy winners especially with Ray at the helm.

In 1966, and in his late 60’s, Ray partnered with John Deknatel to form C. Raymond Hunt Associates to expand the application and refinement of the Hunt deep-v hull to a wide range of boats. Under Deknatel’s leadership, the firm expanded its presence in the production boat and custom yacht markets.

Designs have been created for major boat manufacturers including: Bertram, Grady-White, Boston Whaler, Robalo, Cruisers, Chris-Craft, 4 Winns, Southport, Grand Banks, SeaArk, Regal, and Wellcraft. Significant were the Eastbay 38, the first of the fast traditional cruisers that spawned an entirely new market, and the first Robalo in 1970, a center console flats boat with offshore capability.

Hunt has designed all Grady-White hulls for more than 25 years.

Custom Hunt-designed yachts have been built around the world at such yards as Burger, Palmer Johnson, Hinckley, Lyman-Morse, Nautor, and Royal Huisman.

The firm demonstrated its flexibility and expertise by keeping a foot in the sailboat market throughout the sailing boom of the 1970’s and 1980’s with designs for Cal, O’Day, Ranger, and Paceship.

“I think we were unique among designers at the time doing power and sail design simultaneously,” said Deknatel.

Starting in the late 1970’s Willard led the firm’s entry into the commercial and military markets. Designs have been done for the Navy, Coast Guard, police and fire departments worldwide.

“The Hunt designed and Gladding-Hearn built pilot boats have proven to be the choice of the majority of U.S. pilots for their unmatched capability in rough seas. Pilotage is perhaps the highest use of the Hunt deep-v, given the demands of all-weather operation,” said Willard, who has been President of the firm since Deknatel’s retirement last year. “That same experience has been applied across the breadth of Hunt designs.”

In 1998, Deknatel and Willard began Hunt Yachts Inc. to produce its own line of classic New England style cruisers. Hunt Yachts was sold to Hinckley in 2013.

Located in the New Bedford Historic District since 2006 after 40 years in Boston, C. Raymond Hunt Associates employs a staff of 10 including naval architects, engineers, designers and administrative. Peter Boyce is the firm’s Principal Designer and Craig Obara is Chief Naval Architect.