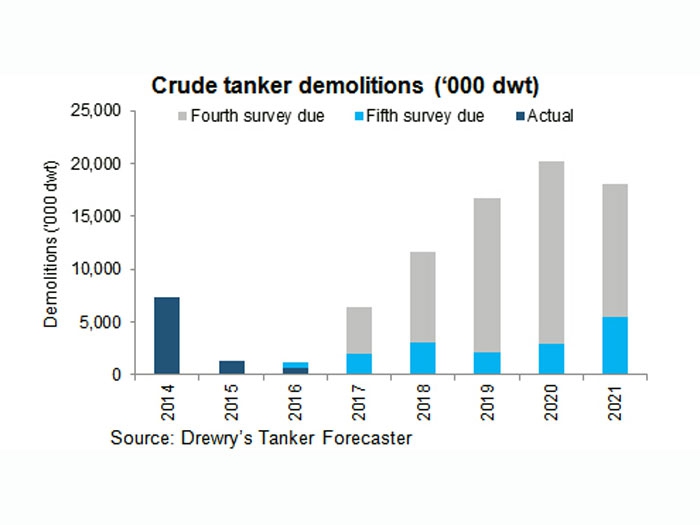 NOVEMBER 16, 2016—The implementation of the IMO Ballast Water Management Convention in combination with weakness in freight rates will increase tanker shipping demolitions, according to Tanker Forecaster, a quarterly analysis published by global shipping consultancy Drewry.

While the decline in tanker freight rates, has not increased demolitions, scrapping is expected to increase in the next two years, says Drewry, as shipowners start feeling the heat of persistent, low freight rates. But as the fleet is relatively young, demolitions will be moderate.

The IMO Ballast Water Management Convention will require that all vessels going into deep sea have in-built Ballast Water Treatment Systems (BWTS) by September 2017. Existing vessels will have a grace period to carry out the retrofit during their next special survey if this occurs after the deadline. Some owners are expected to bring forward fourth special surveys, if they fall around the scheduled deadline, in order to delay retrofitting BWTS to the fifth special survey. But vessel owners for which the survey is due after mid-2018 will probably have to either retrofit BWTS or scrap their tonnage. The additional cost of retrofitting BWTS along with the special survey will force many owners to scrap younger vessels before the next survey is due.

Drewry estimates that about 74 crude tankers (14 million dwt) and 114 product tankers (5.6 million dwt) will have their fourth special survey due between mid-2018 and 2021, making them potential victims of the new regulation.

“We do not expect all these vessels to be scrapped since many of them are on long-term charter at attractive rates, justifying the additional cost of retrofitting BWTS,” says Rajesh Verma, Drewry’s lead analyst for tanker shipping. “As tanker rates will remain well above operating costs during the forecast period, many owners might opt to operate their vessels after incurring this additional cost in anticipation of a recovery in rates,” he adds.

“However, since the tanker market will be oversupplied, older vessels will find it difficult to get employment, which in turn will force many owners to scrap their tonnage just before their next survey is due,” continues Verma.