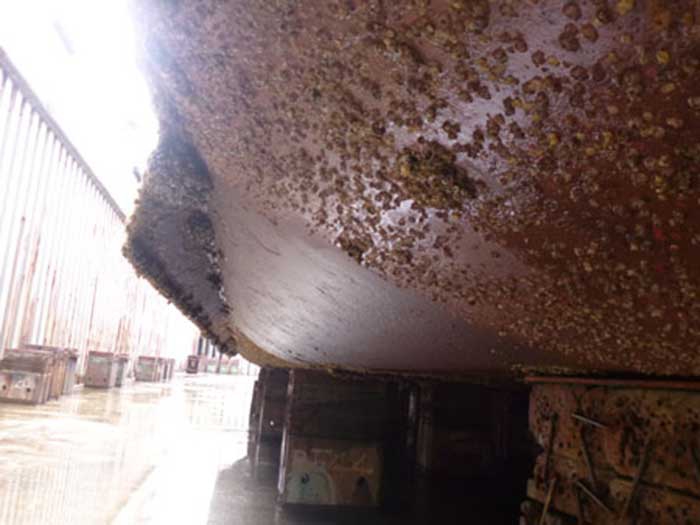 Developed by I-Tech AB, a Swedish bio-tech company founded by a group of researchers from Chalmers University of Technology and the University of Gothenburg (see earlier story), Selektope’s pharmacological action repels barnacle settlement on ships’ hulls by temporarily stimulating the barnacle larvae’s swimming behavior. It is fully approved under the EU’s Biocidal Products Regulation.

Seaflo Neo CF Premium is based on zinc polymer technology and is a coating with an in-service life exceeding five years, ideal for oceangoing vessels operating worldwide. It has already been applied in full coats to vessels owned by shipping companies based in Sweden, Hong Kong, South Korea and Japan.

Seaflo Neo-S Premium is based on silyl polymer technology, and specifically targets “low activity” vessels and has kept hulls free from barnacles, even when ships have been static during outfitting in the harsh fouling conditions in South Korean shipyards, according to CMP.

High levels of biofouling on a ship’s hull increase drag, reduce vessel performance and increase fuel consumption significantly. Selektope is “proving to be spectacularly effective in the prevention of barnacle attachment and is confirming itself capable of unsurpassed antifouling performance, even when a ship is at anchorage for months,” CMP says.

The Seaflo Neo range has been developed over a decade of trials and performance data gathering by CMP. Due to the low concentration needed, Selektope does not compromise the chemical structure, color or other biocides of a marine coating.

Philip Chaabane, Chief Executive I-TECH, comments: “After a 16-year journey for Selektope through research, testing, approvals and industrialization, we are honored to be part of CMP’s new premium antifouling range. Selektope is already excelling in mainstream shipping operations, as well as the tougher conditions arising from more aggressive fouling.”

I-Tech reports orders for coatings including Selektope in the first part of 2016 as double those achieved for the whole of 2015.