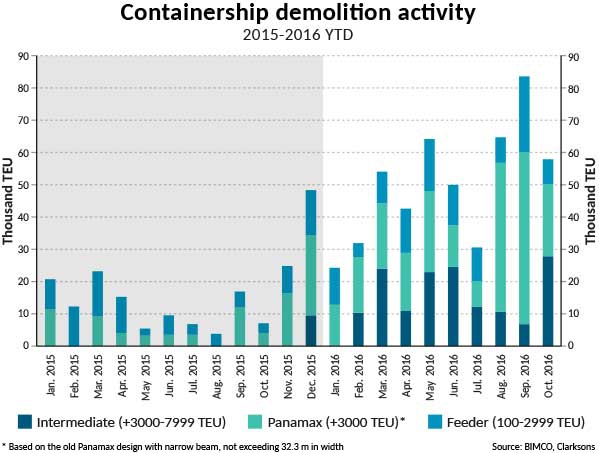 NOVEMBER 7, 2016 —Containership demolition is at an all time high —creating what BIMCO calls “a positive surprise for the struggling container shipping industry. “

“It is important that the demolition of excess capacity comes sooner rather than later, as there is still a huge delivery schedule hanging over the container shipping industry for the rest of this year and well into 2017-2018. However, the high demolition activity is currently softening the net supply growth rate of the container shipping capacity and will prevent a darker outlook for the years to come, if maintained.”

So far containerships totaling 500,000 TEU in capacity have been scrapped, this is 4.2 times more TEU than the scrapping activity for the same months in 2015

The demolition of Intermediate containership is a strong signal, for the measures taken in the container shipping industry, as they generally are bigger and younger than the Panamax and Feeder containerships.

The high level of scrapping follows on BIMCO reporting the lowest level of newbuilding contracts in 20 years. Container contracts, based on CGT, were down 84% for the first eight months of 2016 compared to the same period in 2015.

“The events in 2016 have shown, that the tools to turn the container shipping industry around are being used and are working,” says Peter Sand. “The recommendations to consolidate fleets and demolish ships are being taken serious within the industry.”