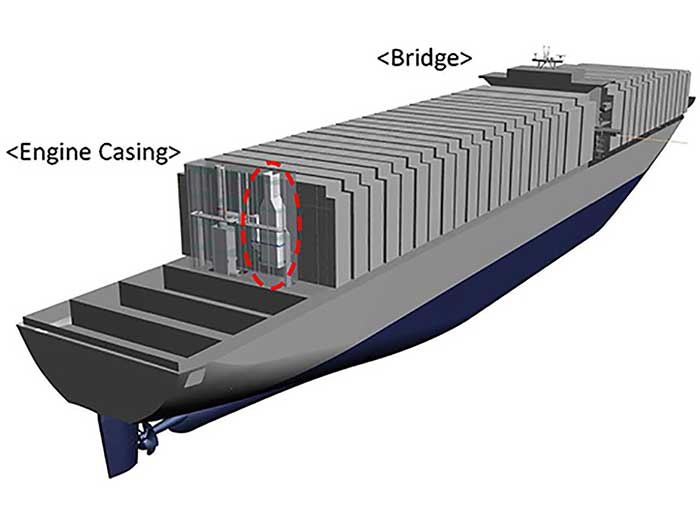 The adoption of a rectangular box-shape configuration — a world first — offers outstanding ease of installation in small spaces and emissions treatment meeting the needs of high-output engines used on large-scale containerships.

The new scrubber was developed in response to stringent new SOx emissions regulations that come into effect globally from 2020. It is able to purify exhaust gas emitted from inexpensive heavy fuel oil to a level equivalent to more expensive low-sulfur fuels, and has been designed to allow easy installation on existing ships.

The SOx scrubber uses seawater as its cleaning agent, adopting a simple “open-loop” system in which seawater intake is sprayed directly on the exhaust gas. Effective use of seawater alkaline eliminates the need for chemicals or additional processing. Further, because the horizontal and vertical dimensions of the rectangular scrubber tower can be freely modified, volume efficiency is higher than previous cylindrical scrubbers, providing space savings. The equipment configuration is simple, allowing easy installation not only in newly commissioned ships but in retrofitted vessels as well.

The scrubber’s main unit can be set into the upper deck’s engine casing, meaning that it doesn’t encroach on the ship’s load space. This is particularly beneficial for large-scale containerships that use a “twin island” design structure. Going forward, MHPS will apply its expertise in local procurement and construction accrued through flue-gas treatment systems for land installations to the new marine scrubber, and will also focus on reducing costs.

Deliveries of the scrubber are expected to begin in 2020 and, in preparation, both companies will seek certification from selected countries while conducting extensive tests on ships. Sales offerings will focus on installations for both newly commissioned ships and ships already in service. This includes both ships constructed by MHI, as well as ships built by other shipyards.