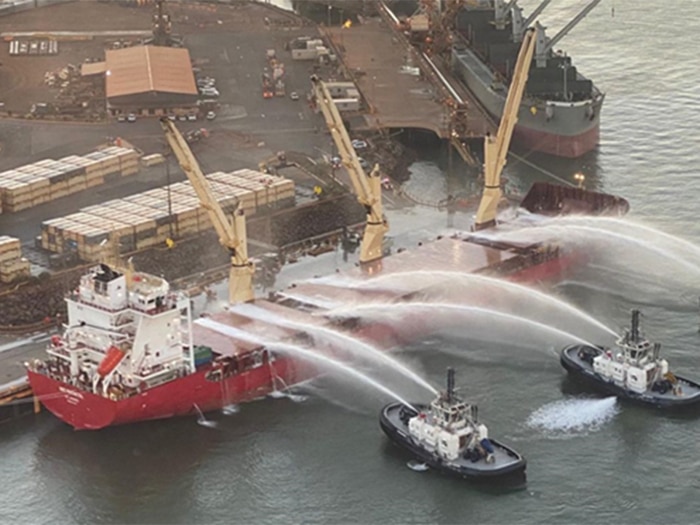 Fire on BBC Rhonetal was tenth such fire on a ship managed by the same parent company in the past 14 years. [Image: ATSB]

Sounds like this comes under the category of “when will they ever learn?”

The Australian Transport Safety Bureau has issued safety recommendations to the managers and parent company of the cargo ship BBC Rhonetal, following an investigation into a fire in the hold of the vessel at Port Hedland, Western Australia. It was the 10th such fire on a company ship in the past 14 years, and the fourth investigated by the ATSB, identifying similar contributing factors;

In this latest incident, the 2013-built, 17,557 dwt general cargo ship BBC Rhonetal, operated by BBC Chartering & Logistics, was alongside at Port Hedland on the morning of March 25, 2021, when a fire broke out in the lower cargo hold during hot work using a plasma torch to cut welded sea fastenings for cargo units in preparation for unloading them. The fire was not declared extinguished until three days later.

The ATSB’s transport safety investigation into the incident found this to be the tenth such fire on a ship managed under the same parent company in the past 14 years, and the fourth investigated by the ATSB, identifying similar contributing factors.

“The ATSB’s investigation found the risk of fire had not been adequately assessed by the crew prior to the commencement of the hot work,” ATSB Chief Commissioner Angus Mitchell said. “As a result, a continuous fire watch was not maintained, and proper precautions were not taken to sufficiently protect vulnerable cargo from catching alight.”

The ATSB found BBC Rhonetal’s managers had not effectively implemented the shipboard safety management system procedures to prevent the fire.

“The continuing incidence of fires on the cargo holds of ships while performing hot work highlights the importance of adhering to shipboard procedures and recognised safe work guidelines for hot work,” Mitchell said.

According to ATSB it has been advised by BBC Rhonetal’s managers that procedures for hot work will be amended to better describe the role of the fire watch, emphasizing its importance in fire prevention. Fire watch requirements will also be integrated into the hot work permit procedure and additional equipment for the fire watch is to be distributed across the fleet.

The company tells ATSB that it also intends to undertake measures to educate shipboard crew on the amended procedures and the additional equipment, including through implementation of a training video.

“While the ATSB considers the safety action proposed by the ship’s managers in this case has the potential to address the hot work safety issue, no timeline has been provided for their implementation, and the ATSB has therefore issued a formal recommendation to the ship’s managers, and the parent company,” Mitchell noted.

An ATSB safety recommendation remains open until the agency is satisfied the responsible organization has addressed the safety issue identified.

“The ATSB is recommending the ship’s managers, Briese Heavylift, and its parent company Briese Schiffahrts, take safety action to ensure safety management system procedures are effectively implemented on BBC Rhonetal and all other relevant ships across their fleets,” Mitchell said.