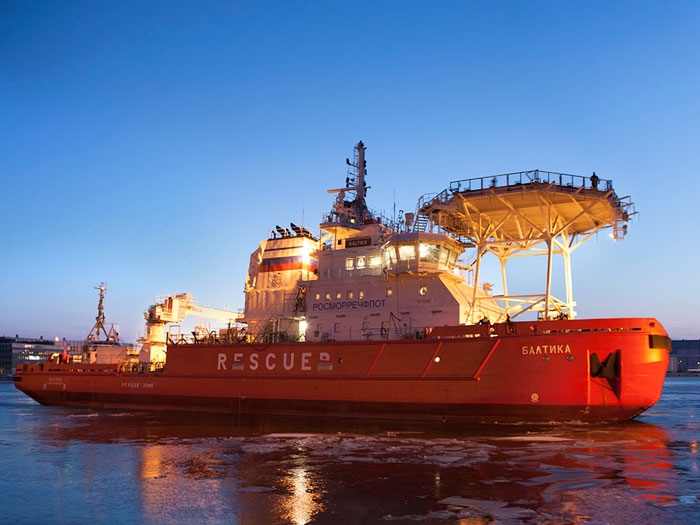 APRIL 11, 2014 — A new type of icebreaker that uses its asymmetric hull to break ice side ways was demonstrated this week at Finland’s Arctech Helsinki Shipyard.

The icebreaking multipurpose emergency and rescue vessel Baltika is being built for the Russian Federal Agency of Sea and River Transport and will be operated by the FGI Gosmorspassluzhba (Russian Marine Emergency Rescue Service).It will be used in icebreaking, rescue and oil spill response operations in the Gulf of Finland.

The vessel features an asymmetric hull, built-in oil recovery system and three 360 degrees rotating propulsors, which allow the vessel to operate efficiently sideways, astern and ahead.

In the oblique mode the vessel will be able to generate a 50 m wide channel in 0.6 m thick ice. Baltika is thus the first icebreaker ever that can break a channel in ice that is twice as wide as its own breadth.

The design of the vessel is based on ARC 100 concept developed by Aker Arctic Technology.

“The icebreaking emergency and rescue vessel has been on the sea trials and the functionality of the vessel has been assured regarding maneuvrability, sideways icebreaking mode and the new type of oil recovery system among other things,” says Esko Mustamäki, the Managing Director of Arctech Helsinki Shipyard. “We are extremely satisfied with the features of the vessel and convinced that the multifunctional Baltika will secure the seaborne transports in the Gulf of Finland.”

The advanced oil recovery system is also suitable for operation in heavy waves when oil recovery is very challenging.

The vessel measures 76.4 m in length and  20.5 m in breadth. The three main diesel generator sets have a total power of 9 MW and the total propulsion power is 7.5 MW.

The vessel is being built in co-operation with Kaliningrad, Russia, based Shipyard Yantar JSC, that has produced the blocks of the vessel.

The hull assembly started at Helsinki Shipyard in June 2013. In addition to the hull assembly, the design, outfitting and commissioning are being performed by Arctech. The vessel will be delivered to the customer in spring 2014.