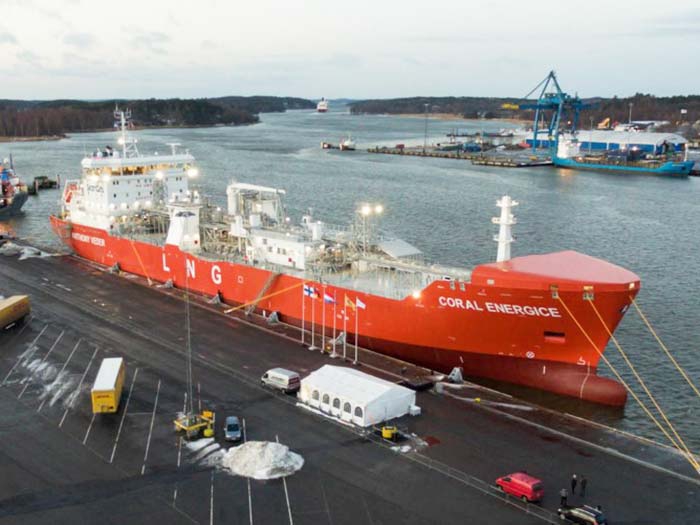 Built for Netherlands based Anthony Veder by German shipbuilder Neptun Werft, the 164 m Coral EnergICE is specially designed and constructed to operate in the Baltic Sea.

The vessel is operationally managed by Skangas to bring LNG to Skangas LNG terminal in Pori and the joint venture Manga LNG terminal Tornio in Finland.

The vessel’s hull is reinforced to break through one-meter thick ice with the engines and generators designed to give the vessel extra power when sailing through thick ice and harsh winter conditions.

Equipped with a dual fuel engine, it uses LNG boil-off gas as a fuel for its main and auxiliary engines, making the vessel fully compliant with future emission regulations.

On-deck innovations providing for safe operations include a cap on deck that protects the equipment and prevents icing outside. The vessel also has additional shelters on deck with warmer platforms for the crew’s feet. Heat tracing on the doors ensures that they will always open, no matter how harsh the conditions might be.

Anthony Veder CEO, Jan Valkier says: “Coral EnergICE is the third LNG carrier we have delivered to our long-term customer Skangas in the past five years. The high-tech vessel is capable of serving the northern Finnish harbor of Tornio all year around, even when temperatures reach as low as -25 Celsius degrees. To ensure that it’s a comfortable and friendly place for our crew to work, we engaged an ergonomic engineer to look closely at the accommodation design. I am extremely proud of the end-result.”

Neptun Werft Managing Director, Raimon Strunck says: “Following the successful delivery of Coral Energy in 2012, we were delighted that Anthony Veder awarded us the construction of Coral EnergICE. The new vessel’s design is based on Coral Energy, enhanced with technological innovations and construction adaptations for extreme cold weather conditions, thereby giving her the 1A Super ice class classification.”