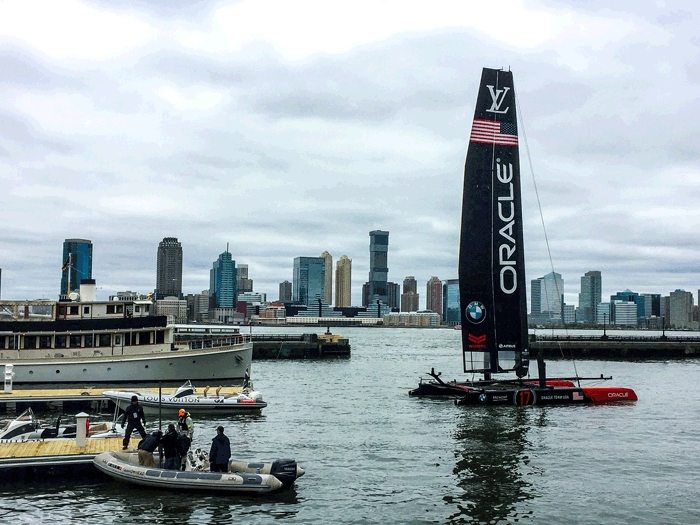 May 6, 2016 —The America’s Cup will return to New York City this weekend for the first time since 1920. Part of the Louis Vuitton America’s Cup World Series, the event is one of six taking place this year with teams from around the world accumulating points towards the final competition, the 35th America’s Cup to be held in Bermuda in 2017.

As a lead up to the race, engine manufacturer Yanmar and ORACLE Team USA invited members of the media, including MARINE LOG, to jump onboard either ORACLE Team USA’s official chase boat or Yanmar’s X39 Concept Boat during a special on water demonstration.

The two chase boats play a vital role in the team’s operation, providing logistical, safety and coaching support during the race. As ORACLE Team USA skipper Jimmy Spithill explained, it’s necessary for the chase boats to be able to “keep up” with the racing boats. In order for that to happen, the right engine provider needed to be chosen. That’s where its partnership with Yanmar comes in.

Yanmar provided the 8LV inboard marine diesel engine and ZT sterndrive system for the ORACLE Team USA chase boats, Chase Boat Yanmar 1 and Chase Boat Yanmar 2, generating a top speed of 53 knots—crucial to the team’s operations. Should the team’s cat capsize during the race, the chase boat is there in seconds to help assist with righting the vessel and helping crew. The chase boats also have the task of tracking race progress and gathering and analyzing data on the crew’s daily performance.

If you’re in the New York City area this weekend, checkout the Louis Vuitton America’s Cup World Series, or catch it on NBCSN. The event will take place on the lower Hudson River off the Battery Park City esplanade on May 7 and 8. There will also be an Event Village at Brookfield Place Waterfront Plaza where spectators will be able to view the event.