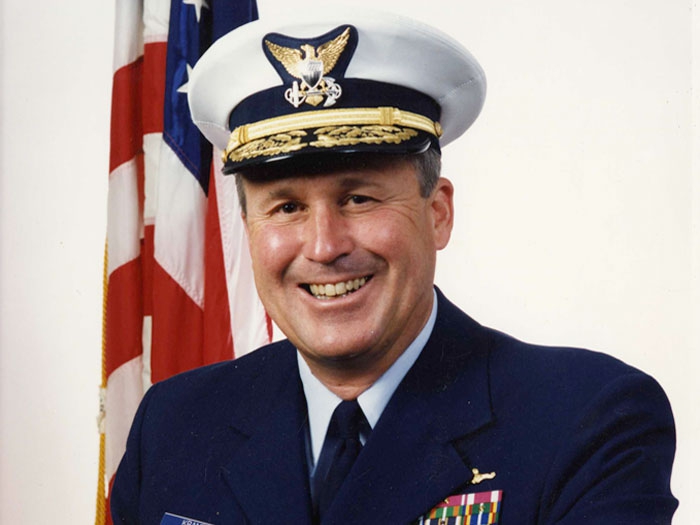 He led the Coast Guard’s international efforts during Operation Baltops in the Baltic Sea and helped several former Soviet republics such as Latvia, Estonia, Lithuania and Ukraine develop their own individual coast guard organizations. He also worked closely with Russia to institute joint operations and agreements to ensure fish stocks and the environment were actively protected, as well as ensuring coordinated search and rescue cases were effectively carried out.

Current Coast Guard Commandant Adm. Paul Zukunft recalled Admiral Kramek’s dedication to service. “I witnessed the commitment of Admiral Kramek personally while serving as commanding officer of Coast Guard Cutter Harriet Lane during Operation Able Manner,” says Adm. Paul Zukunft. “I recall him inspiring my crew, and other responding crews, with a stirring call to service amidst difficult circumstances. He lifted our spirits and encouraged perseverance. At his final State of the Coast Guard Address as commandant, Admiral Kramek asked, ‘Are we prepared for the changes we expect in the new millennium?’ Due to his leadership, his guidance and his commitment, the answer is a resounding yes. With heavy hearts, we remember Admiral Kramek as we send our thoughts and prayers to Mrs. Patricia Kramek and the entire Kramek family.”

Kramek was a steadfast leader during national tragedies, such as the crashes of Alaska Airlines Flight 301 in February 1996 off the coast of California and TWA Flight 800 outside of New York five months later. He successfully led the Coast Guard through difficult budget issues and directed the “streamlining” plan mandated by President Bill Clinton’s National Performance Review and Mandate For Change.

He served concurrently as the Regional Drug Interdiction Coordinator and principal of a migration task force during his role as commander of the Seventh District. His other major commands included Governors Island, the then-largest base in the Coast Guard, and the Coast Guard Cutter Midgett.

He graduated from the U.S. Coast Guard Academy in 1961 with a Bachelor of Science degree in engineering and was both a surface operations specialist and naval engineer serving around the world, particularly in Alaska and the Atlantic, Caribbean and Pacific regions. Kramek was a lifelong learner and attended four graduate schools including the University of Michigan, Johns Hopkins University, the University of Alaska and the U.S. Naval War College in Newport, Rhode Island, where he graduated with highest distinction. He received Master of Science degrees in the fields of naval architecture, marine engineering, mechanical engineering and engineering management.